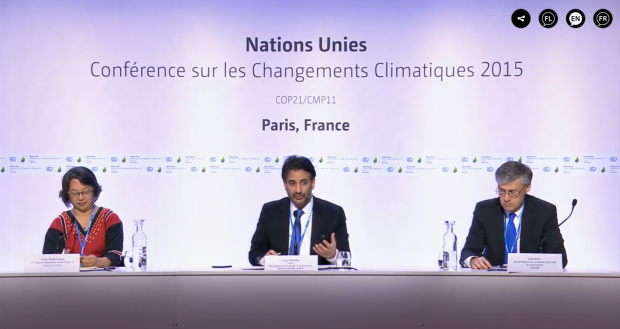 Presiding at the OHCHR press conference marking Human Rights Day at COP21 are Craig Mohikber, chief of its development, economic and social issues branch, and John Knox, special rapporteur on human rights and the environment, as well as Vicky Tauli-Corpuz, UN special rapporteur on the rights of indigenous peoples. SCREENSHOT FROM LIVE BROADCAST

PARIS – The United Nations ushered in Human Rights Day on Dec. 10, 2015, with a call for the 21st Conference of Parties (COP21) to adopt in the final agreement a 1.5 degree Celsius target instead of 2 degrees, as even just an incremental increase would have drastic effects on human rights around the world.

“It’s clear, and many governments have been making the case, that in order to fulfill their human rights obligations, governments should be pursuing the lowest possible target, meaning a 1.5 instead of a 2 degree target, and should recognize that in the text,” John Knox, special rapporteur on human rights and the environment of the Office of the United Nations High Commissioner for Human Rights (OHCHR), said at a press conference at the sidelines of COP21 negotiations in Paris, France.

READ: PH at COP21: ‘We are the face of vulnerability’

Knox also emphasized the importance of referencing human rights not only in the final agreement’s preamble but also in paragraphs on adaptation, mitigation, and climate finance.

“What Paris can do is provide a strong statement that allows us when we go forward to look at Paris and have an anchor for the future decisions that will have to be made on the issues of finance, adaptation, mitigation, and so forth,” he said.

COP21 aims to ink a legally binding agreement to reduce greenhouse gas emissions. The final Paris agreement, the latest draft of which was released at 3 p.m. Paris time (10 p.m. Philippine time) on Dec. 9, is expected to be submitted on Friday, Dec. 11.

Also at the press conference, Vicky Tauli-Corpuz, UN Special Rapporteur on the Rights of Indigenous People, also called on negotiators not to forget the rights of indigenous peoples, who often are the most vulnerable to climate change.

“Human rights in general and indigenous people’s rights in particular should not be traded away in Paris,” said Corpuz, herself of Igorot descent and born in Mountain Province.

The Philippine delegation in particular, in its capacity as current chair of the Climate Vulnerable Forum, has been pushing to include human rights and a 1.5 degrees Celsius goal in the final agreement.

And it’s not just the national government taking action. The Commission on Human Rights of the Philippines on Dec. 5 said it would investigate the landmark human rights case seeking to investigate 50 “carbon majors,” a moniker for the top 90 fossil and cement companies responsible for around 65 percent of human-related carbon emissions between 1751 and 2013.

The Philippine case, first filed on Sept. 22 by the local Greenpeace chapter and several other environmental groups, is the first of its kind in the world.

‘Not caring about climate change is inhuman’