Syrians to arrive in Canada on government flights Thursday 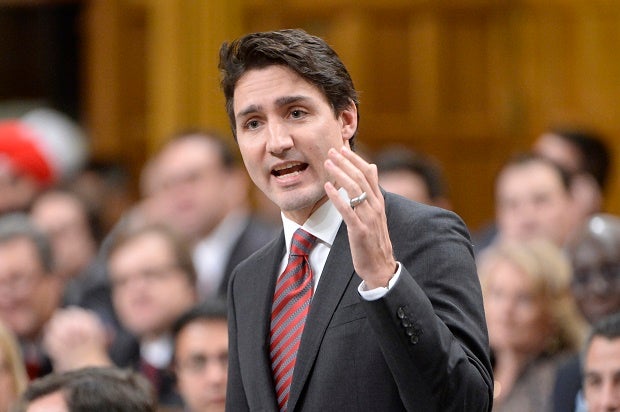 Prime Minister Justin Trudeau answers a question during question period in the House of Commons on Parliament Hill in Ottawa, on Wednesday, Dec. 9, 2015. The first two government flights carrying Syrian refugees to Canada will arrive this week, Trudeau announced Wednesday. The Canadian Press via AP

READ: Canada to accept 10,000 Syrians within one year

The first flight will arrive in Toronto on Thursday evening and another will land in Montreal on Saturday, Trudeau said in Parliament. The planes, both military aircraft, will carry a total of 300 Syrian refugees.

The newly elected Liberal government is pushing forward with its pledge to resettle 25,000 Syrian refugees by the end of February amid an intense debate in the West over what to do with people fleeing violence in the Middle East.

READ: Canada to announce plan to bring 25,000 refugees on Tuesday

In the United States, the Obama administration plans to take in 10,000 Syrian refugees over the next year. But several Republican governors have tried to stop the arrival of Syrian refugees in their states in the wake of the deadly attacks blamed on Islamic extremists in Paris and California. Presidential candidate Donald Trump caused a worldwide uproar with a proposal to block Muslims from entering the U.S.

Canadian Immigration Minister John McCallum noted that in contrast to the United States, all 10 of Canada’s provincial leaders support accepting the refugees.

“This is a great moment for Canada. This shows the way we really are,” McCallum said. “It truly is a non-partisan, national project.”

The government said first two government flights will be a military version of the Airbus A-310 and chartered flights will be used for subsequent arrivals. Hundreds of Syrian refugees have already arrived via commercial aircraft since Nov. 4.

McCallum said about 800 refugees are being screened by security and health officers each day in Lebanon and Jordan. Canadian officials have been working closely with the U.N. refugee agency, which has been calling and texting refugees to ask if they want to come to Canada.

Canada’s commitment reflects the change in government after October’s election. Former Conservative Canadian Prime Minister Stephen Harper, who lost the Oct. 19 election to Trudeau, had declined to resettle more Syrian refugees, despite the haunting image of a drowned 3-year-old Syrian boy washed up on a Turkish beach. The boy had relatives in Canada, and the refugee crisis became a major campaign issue.

Trudeau initially wanted to resettle 25,000 refugees in Canada by Dec. 31 but there were concerns about logistics and he faced some pushback following the Paris attacks. McCallum later said Canada wants to get it done fast but also do it right.

Canada has long prided itself on opening its doors to asylum seekers. In times of crisis in decades past, Canada resettled refugees quickly and in large numbers. It airlifted more than 5,000 people from Kosovo in the late 1990s, more than 5,000 from Uganda in 1972 and resettled 60,000 Vietnamese in 1979-80. More than 1.2 million refugees have arrived in Canada since World War II.