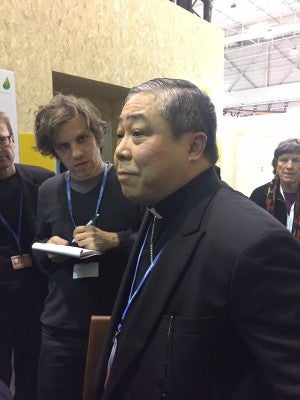 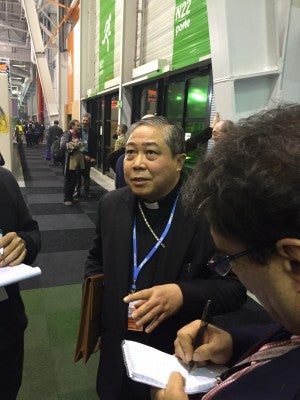 PARIS—From observer to member. One of the Vatican’s top diplomats said the Holy See was studying the possibility of acceding to the 1992 United Nations Framework Convention on Climate Change, in order to sign the new climate agreement under negotiation in Paris. If the Holy See surrenders its traditional observer status to become a full-fledged member—the 196th state and the 197th party—of the UNFCCC, the transition will likely send another strong signal of Pope Francis’ “moral leadership” in ecological issues.

Msgr. Bernardito Auza, the Apostolic Nuncio to the United Nations and alternate head of the Holy See’s delegation to the 21st Conference of Parties (COP21) in Paris, said on the sidelines of the negotiations Tuesday night that Vatican diplomats were poring over the calendar to determine their next steps.

Auza, a Filipino, said if the Paris talks were to conclude in a new agreement, the period for “signing” the new accord would run from April 22, 2016 to April 21, 2017. He suggested that the Holy See was interested in ratifying the agreement, if possible, on the first day — but this would mean acceding to the 1992 convention by January. “I think we need three months from signing, from the signing of the UNFCCC, to the signing of the Paris agreement.”

Auza, who served as moderator of a well-attended press briefing by Cardinal Peter Turkson and other dignitaries, said he did not have full knowledge of the plans — “I don’t live in the Vatican,” he said — but acknowledged that the Vatican was looking into the possibility, “and we are also looking at, we haven’t ratified yet, we haven’t adhered yet to the UN convention against desertification, and probably we are also moving into ratifying that.”

He agreed that signing the new agreement might lead to a more proactive role for the Vatican,  “with the kind of moral leadership that the Holy Father has been providing on this question.”

“I work in the United Nations. You just can’t imagine the impact of ‘Laudato Si’ on the negotiations, even in the post-2015 development agenda, which has become of course the 2030 agenda for sustainable development. And there it was very, very strong. Almost every delegation cited the Pope.”

“Even the co-facilitators used the Pope to put the people in line,” he joked.

The nuncio clarified that in the event of accession, it would be Cardinal Secretary of State Pietro Parolin, and not the Pope, who would sign on behalf of the Holy See.

At the COP21 opening ceremony last week, Parolin spoke of change and continuity. “COP 21 is not a moment of arrival or a starting point, but rather a crucial path in a process that without doubt will not end in 2015.”

The Vatican — or more properly, the Holy See — is by its own choice a Permanent Observer to the United Nations, and also has observer status under the UNFCCC.

In the UN glossary, accession is defined as “the act whereby a state accepts the offer or the opportunity to become a party to a treaty already negotiated and signed by other states. It has the same legal effect as ratification. Accession usually occurs after the treaty has entered into force.”