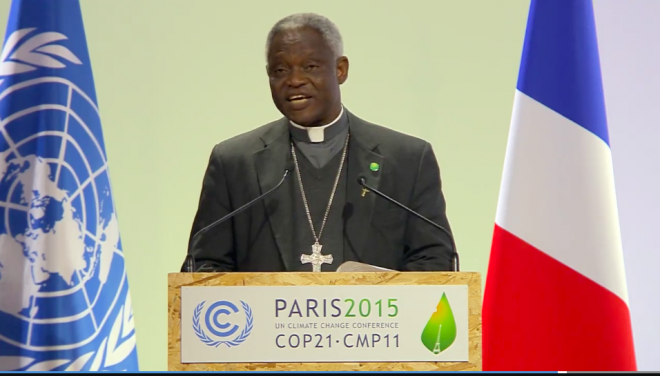 PARIS—The Vatican today pledged its support for the ambitious climate goal of “well under 2 degrees”—a statement awaited by the Philippine delegation to the climate change talks in this city.

Cardinal Peter K. A. Turkson, the papal envoy to the 21st Conference of Parties, recalled the July 2 “conscience for climate” summit also held in Paris, and said: “We come back together to make this conscience bear fruit, fruit that will last, namely a commitment to curb carbon emission to well under 2 degrees.”

He conveyed the Vatican’s support during his turn at the continuation of the High-Level Meeting held today, reminding the ministers present that resolving the consequences of climate change was not the work of states and governments alone.

Turkson, president of the Pontifical Council for Justice and Peace of the Holy See, had visited with Environment Secretary Ramon Paje and Sec. Emmanuel de Guzman of the Climate Change Commission at the Philippine delegation office on Monday afternoon. Delegation spokesperson Antonio La Viña, who was also at the bilateral meeting, described the exchange as substantive and hopeful.

Speaking at a press briefing of the Climate Vulnerable Forum, which the Philippines chairs, De Guzman said the Vatican party welcomed the CVF initiative. “They’re very receptive of our 1.5 goal,” he said. “Hopefully we will hear something from the Pope this week. As I assess it, the 1.5 goal is promotive of human rights.”

During the visit, the Philippine delegation expressly asked Turkson to add its moral weight to the controversial goal of limiting the rise in global temperatures since the Industrial Revolution to 1.5 degrees Celsius — an ambitious target, given that climate scientists expect that the temperature rise would reach the 1-degree mark by the end of the year. It is also a controversial target, because it may have serious implications for economic growth. The phrasing Turkson used — “well under 2 degrees” — is similar to the “well below 2 degrees” used by spokespersons for China, the United States and other major emitters, which they interpret to mean as including the 1.5-degree target in its range.

Despite its small size, the Vatican enjoys considerable diplomatic influence. On the issue of climate change, Pope Francis’ pathbreaking encyclical on the environment, “Laudato Si,” has raised the Vatican’s profile even more sharply. It has been referenced many times in the run-up to the Paris talks and during the negotiations.