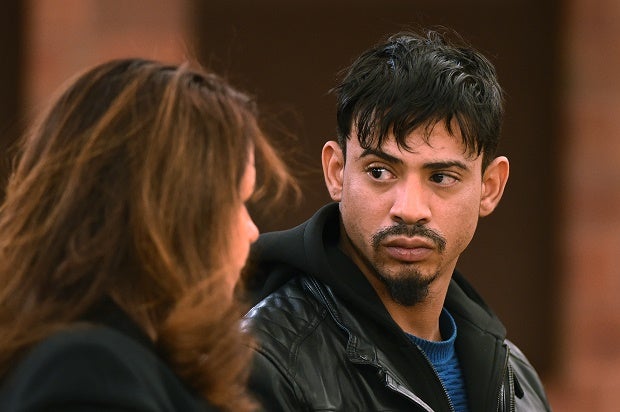 Amador Medina, right, of Hartford, listens to public defender Johanna Canning during his arraignment at Hartford Superior Court Monday, Dec. 7, 2015, in Hartford, Conn. Media was charged as a fugitive from justice after police found the remains of five bodies stolen from a Worcester, Massachusetts cemetery in Medina’s Hartford apartment on Friday that he claimed were used for religious purposes. He faces five counts of disinterment of bodies, conspiracy and accessory before the fact in Massachusetts, according to police. Cloe Poisson/Hartford Courant via AP. Pool

HARTFORD, Connecticut—A man described by police as a Santeria “priest” caught with human remains in his Connecticut home agreed on Monday to go to Massachusetts to face accusations that he stole the five skeletons from a cemetery.

Amador Medina, 32, made a brief court appearance on Monday and agreed to be taken by police to Worcester, where authorities allege he stole the remains two months ago from a family mausoleum that dates to 1903.

Police arrested Medina on Friday after the remains were found in his apartment. Medina told police he was a Santeria priest and wanted the human bones for religious and healing ceremonies, said Hartford Deputy Police Chief Brian Foley.

“We see (Santeria) rarely in Hartford,” Foley said. “When we do, it’s generally with animals.”

Medina’s public defender didn’t immediately respond to an email seeking comment on the allegations. His relatives and friends declined to comment outside the courtroom.

Santeria mixes Roman Catholicism with a traditional African faith. Scholars say it was imported to Cuba through slaves brought from the Nigeria’s Yoruba tribe, and it is now widely practiced in the Caribbean.

Foley said police have learned that practitioners of Santeria use human bones for medicinal purposes, and the age of the deceased and how long they have been dead are relevant to those practices.

The remains of three adults and two young children were stolen. Police have obtained an arrest warrant charging Medina with five counts of disinterment of bodies and other crimes.