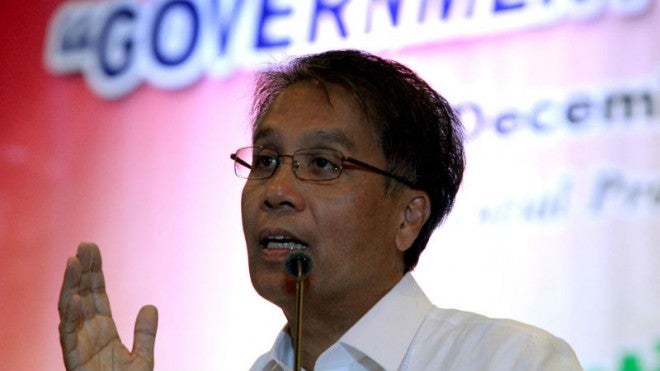 BACOLOD CITY—Former Negros Occidental governor Rafael Coscolluela on Monday said the recent cancellation of Liberal Party (LP) standard-bearer Mar Roxas’ visit to the province was “complicated” and that he was seeking a dialogue with Rep. Alfredo Abelardo Benitez to clarify matters.

Benitez is officially the LP chair of Negros Occidental but last October, he filed to run for reelection as an independent. The congressman is said to be leaning towards supporting the presidential bid of Grace Poe and of her running mate, Sen. Chiz Escudero, who is a close friend.

However, Benitez and Roxas reportedly met last month and had mended fences, and the latter said in an interview in Manila that the Negros congressman would support him.

Roxas was set to join a Pantawid Pamilyang Pilipino Program event organized by the Benitez camp in Victorias City on Nov. 28 but cancelled his trip at the last minute.

Coscolluela, who heads the private sector campaign for Roxas in Negros Occidental, said he has asked for a meeting with Benitez to clarify his agreement with Roxas.

Benitez could not be reached for comment Monday, on whether he would meet with Coscolluela.

Coscolluela said the cancellation of Roxas’ visit to Victorias on Nov. 28 was “not Mar’s fault, it’s very complicated. I had something to do with it but it’s not Mar’s fault, in fact, he said I thought you had settled things there.”

According to Coscoluella, Roxas had said that until matters were settled, he would not be visiting the province.

Coscolluella did not elaborate on what it was that needed to be settled.

He explained that he was not the chair of the LP in Negros Occidental but only headed the “Friends of Mar” campaign in the province.

He said he was only given authority to sign the certificates of nomination and acceptance of the LP candidates in the province during the period of submission of certificates of candidacy and that his authority ends on Dec. 10.

“I have no intention to be the LP chair (of the province),” he said.

“The affairs of the LP are complicated, I do not want to be part of the conflict and the solution,” he added.

Coscoluella said he had no intention of being a substitute candidate to run for Congress against Benitez.

“How can I campaign for my candidate for President if I run (for congressman)?” he said.

There are no indications that the LP will be fielding substitute candidates in Negros Occidental, the deadline for which is Dec. 10, except for one councilor in Silay City, Coscolluela said.

Edgar Maravilla, who filed a COC as LP candidate for councilor in Silay City, is sick and will be substituted by Councilor Reboy Espida, according to Silay Mayor Jose Montelibano.

Coscoluella said he would be supporting some non-LP senatorial candidates.

“I am free to choose who my senatorial candidates will be. If they don’t like that, they can fire me. In the first place, I don’t work for them,” he said.

Aside from Roxas, he is supporting LP vice presidential candidate Leni Robredo, he said.

Coscolluela said he would make his senatorial choices based on his own criteria.

The LP does not have a full senatorial slate and there is room for other candidates, he said.

Coscolluela said he would campaign for Rafael Alunan, a Negrense who is a former tourism and interior secretary, and former senator Richard Gordon.