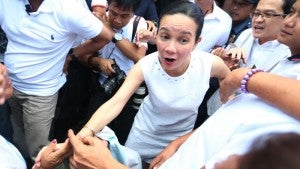 MANILA, Philippines — In the heat of the battle to stay in the race for President, Sen. Grace Poe’s campaign message seems to be getting lost in the wind.

Presidential contender Sen. Grace Poe admitted on Monday that the attempts to push her out of the race to Malacañang might have affected her rating in the recent survey of voters’ choice for the next President.

Poe, the perennial leader in previous poll surveys, acknowledged that the latest Social Weather Stations (SWS) survey, which showed Davao City Mayor Rodrigo Duterte dislodging her from the top spot, was a signal for her to work hard in explaining her predicament to the voters and her agenda of governance.

The SWS poll, commissioned by a Duterte supporter, revealed that the Davao mayor was the choice of 38 percent of 1,200 respondents while Poe was tied in second place along with Vice President Jejomar Binay with 21 percent.

“I think that’s a major reason,” Poe told reporters when asked if the disqualification cases filed against her had affected her standing in the surveys.

“During the past few months, the interest of the people was focused on my cases. (Because of that) my plans for our countrymen were not given proper attention,” she said after addressing the national convention of government workers at the SMX Convention Center in Pasay City.

Speaking in Filipino, she surmised that some of the voters were not sure if her candidacy would continue because of legal questions raised regarding her residency and citizenship.

“But for me, I will go on with my fight. We respect the (rule of) law which must be upheld. This comes with the process of appeal and we believe that we have a strong legal basis to stand on,” Poe stressed.

Instead of questioning its credibility, Poe said the SWS survey would guide her and her campaign team on how to reach out to some 50 million voters nationwide.

She said candidates like her should “listen and respect” the sentiments of the people as reflected in the surveys.

“It’s really important for us to use this as our guide in our messaging,” the senator said.

Asked if she was surprised with Duterte’s big lead over her, Poe said: “If you are too antsy, you cannot stand this kind of battle. For us, you really have to focus on the job.”  SFM