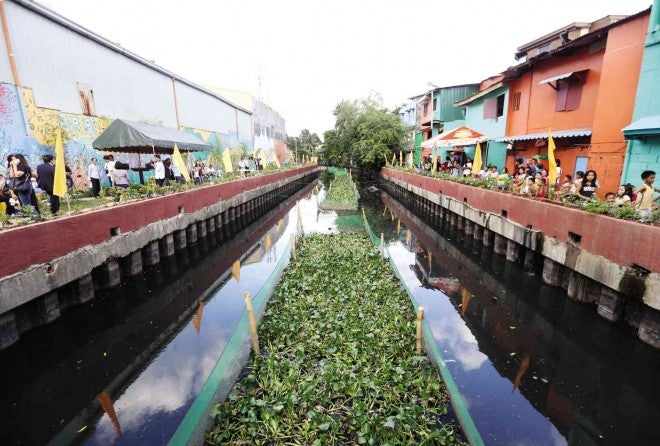 WALLS, WATER COME ALIVE Colorful murals along the banks form part of the P2-million rehabilitation project for Estero de Pandacan in Manila, one of the 47 tributaries of Pasig River. The waterway is given a touch of green by patches of water hyacinth fixed in place by nets.

It has been three decades since Nemia dela Rosa last saw Estero de Pandacan “alive and clean of thrash.”

Thanks to efforts led by a nongovernment organization, the waterway—a fount of fond childhood memories for Dela Rosa and other residents of Pandacan, Manila—is being saved from years of neglect, tidied up and even given a touch of art.

Aside from removing the garbage and the shanties beneath Quirino Bridge, a P2-million rehabilitation project has radically transformed the estero by building a linear park along its banks, complete with solar-powered lamps and muraled walls. Rectangular patches of water hyacinths also adorn the water with greenery, fenced in place by nets so they won’t drift off and clog a nearby pumping station.

The project was celebrated on Nov. 27 by Pandacan residents and ABS-CBN Lingkod Kapamilya Foundation, along with partners GT Foundation, the Manila City government, the Metropolitan Manila Development Authority (MMDA) and the Pasig River Rehabilitation Commission.

The pleasant view brought Dela Rosa back to the mid-1970s, when she first settled near the estero, a tributary of the Pasig River. Back then, “the water was clear and people could catch fish and do their laundry here,” said Dela Rosa, now the village chair of Barangay 847, Pandacan.

But it started to deteriorate in the late 1980s as more homes crowded the banks, she recalled. The filth piled up and festered through the years, breeding diseases, causing a stench, feeding on people’s apathy. Because of it, Dela Rosa recalled, one of her children once contracted dengue.

It will still take time before the waterway is fully restored to pristine conditions, but “at least we can now walk by the estero without covering our noses. We can now walk at night without being afraid of muggers lurking in the dark,’’ she said.

The dredging and improvements on the estero were funded by a P2.143-million donation from GT Foundation, according to Erlinda Corpuz, project coordinator of the ABS-CBN Foundation’s Kapit Bisig Para sa Ilog Pasig.

The project also entailed the relocation of about 200 families and 245 structures in Barangays 847 and 832, Corpuz said. The families were moved from Pandacan to resettlement sites in Calauan, Laguna province, and in Pandi, Norzagaray and San Jose Del Monte in Bulacan.

Kapit Bisig is involved in rehabilitation efforts for 23 out of the 47 Pasig River tributaries.

But it was still up to the residents like Dela Rosa to sustain the momentum. “Using our boats, we unclog the estero every month or whenever we see that a cleanup is necessary,’’ she told the Inquirer. “I asked people in our barangay to stop throwing trash into the water and instead wait for the garbage collection twice a day.”

The village chair, however, expressed disappointment over what she considered to be inconsistencies on the part of city government. “We have seen people from the MMDA who help us in cleaning the estero; but those from Manila City Hall, sometimes they show up, sometimes they don’t.”

Reached for comment, Rogelio Legaspi of Manila’s Department of Engineering and Public Works explained that the maintenance of esteros falls under the MMDA’s mandate. But barangay officials may coordinate with the city’s sanitation department to have trash collected, he said.

The assistant city engineer maintained that the local government constantly coordinates with different national government agencies to rehabilitate Pasig River and its tributaries.

The Manila City government recently secured projects worth P1.7 billion from the Department of Public Works and Highways. Of the amount, more than P1 billion will go to flood-control projects, Legaspi added.