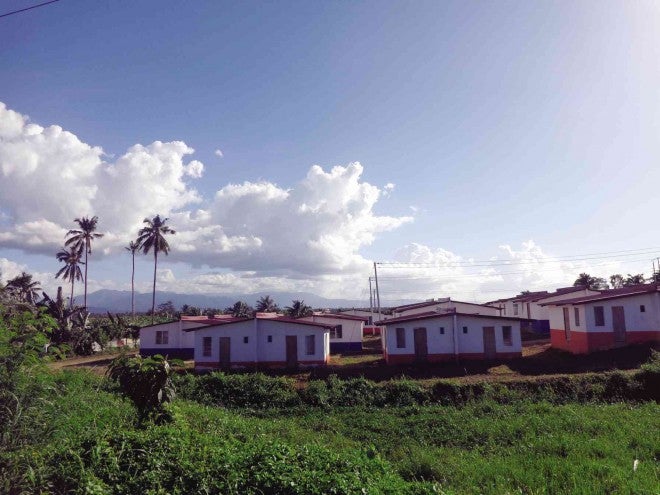 SOME of the 2, 500 duplexes built by the National Housing Authority for Typhoon “Pablo” survivors in Maparat, Compostela town, Compostela Valley province FRINSTON LIM

Local authorities and residents have rallied against a government housing project for survivors of Typhoon “Pablo” in Compostela Valley province, alleging defective units as thousands have yet to move into these homes three years after the disaster.

This even as the province prepared to move forward to complete recovery, marking the third and final commemoration on Friday (Dec. 4) with Mass and a low-key program in New Bataan town, the ground zero of devastation wrought by the strongest storm to hit Mindanao in 100 years.

“We’re now on the path to full recovery. This year is the final commemoration [of that tragic event],” said Fe Maestre, the provincial spokesperson.

But for the tens of thousands of residents uprooted and displaced as a result of the calamity, the wait for new houses could be well beyond three years.

The government, through Task Force Pablo, set aside some P5.6 billion to build new homes for some 14,089 families in Compostela Valley and 3,391 others in Davao Oriental through the National Housing Authority (NHA).

Another P1.8 billion was allocated and downloaded to the Department of Social Welfare and Development (DSWD) for 15,629 homes in Compostela Valley alone.

While the DSWD-implemented Modified Shelter Assistance Program (MSAP) was nearing completion—with 9,767 on-site housing units already built and the last of the three tranches to start by next year—NHA off-site communities have been drawing flak from local officials and residents alike due to alleged delays and defects.

Implemented by private contractors, NHA projects, particularly in the five hardest-hit towns of New Bataan, Monkayo, Compostela, Montevista and Laak, were plagued by structural defects such as poor drainage, inadequate electrical installations, among other issues.

Such was the case of the NHA project in Kidawa village in Laak town, with occupants alleging defects ranging from uneven, rough and unfinished flooring of some 600 units, to faulty electrical installations in all of the total 1,150 duplexes.

“Farmers are also complaining that the housing project’s drainage system empties into their rice fields instead of the Kidawa creek,” Bangonan said.

Last Nov. 11, residents sought the help of the Sangguniang Panlalawigan (provincial board) over the issue, prompting the board to conduct an investigation.

“We received mixed reactions because during our recent visit there, we found out the construction has been stopped for two to three months now,” said Board Member Jayvee Tyron Uy.

Janet Meneses, vice president of Quezon City-based Eagle Rock Construction, contractor of the Kidawa NHA project, told the board that her company was in the process of rectifying the alleged defects.

Board members ordered the creation of a technical working group composed of representatives from the NHA, the provincial engineering office, local government unit and the contractor to inspect the Kidawa project.

Board members lamented the apparent no-show of NHA regional officials during Sangguniang Panlalawigan hearings, even as the provincial government had written officials of the government housing agency.

Board Member Neri Barte said NHA projects in other areas in Compostela Valley should also be investigated for possible defects and problems.

Barte cited an instance in Compostela town, wherein only close to 500 of the 2,500 housing units built are currently being occupied.

Meneses, the Eagle Rock executive, said work in the Kidawa project was delayed due to difficulty in transporting construction materials due to poor road conditions that were compounded every time it rained.

Despite the hitches, Meneses said, they were on track in finishing the project and would have turned it over to the beneficiaries this month. By NHA standards, she said, the Kidawa project was considered “substantially completed.”

“As a common SOP (standard operating procedure) of NHA projects, the perceived deficiencies are the removables, like windows, doors, doorknobs and [electrical materials]. There’s no turning over yet of the project,” Meneses said.

In Compostela’s Maparat NHA project, 719 units have already been raffled off to beneficiaries while at least 416 have been occupied, said Jovelin Abucayon, town shelter focal person.

Abucayon said it was the local government that identified and screened beneficiaries “but the NHA central office has the final say as to who would be included in the list of actual recipients.”

“They do final validation to ensure each beneficiary is entitled to only one housing unit,” she said.

Red tape at the NHA could be the reason for the apparent delay in the full occupation of the 2,500-unit San Antonio NHA Village, Abucayon said.

“The ball is now in the NHA’s court,” she said.