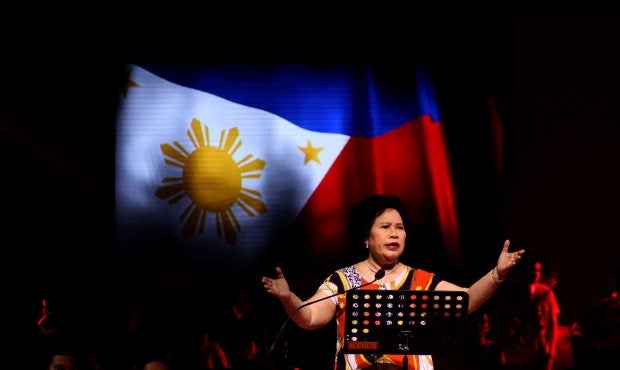 Senator Miriam Defensor-Santiago was a runaway winner in the mock elections held at the University of the Philippines (UPLB) in Laguna.

Santiago got 1,507 votes or 65.75 percent of the 2,292 respondents choosing her as the next year’s president. Davao City Mayor Rodrigo Duterte was a far second, with 18.32 percent of votes.

Respondents who voted for other candidates totaled to 3.49 percent while 1.09 percent of respondents abstained from voting.

Miguel Enrico Ayson, UPLB political science instructor, said only UPLB students who are qualified to vote in the 2016 elections were allowed to participate in the mock poll, through booths in the campus.

Ayson said the respondents were also asked to write their student numbers to prevent double voting.

“Similar to the voting process in actual elections, students who voted in the mock poll were given sample ballots and were asked to shade the circle before the names of their preferred candidate,” he said.

Santiago welcomed her “landslide win,” saying the candidate with the greatest youth support has greater chances of winning in next year’s polls.

“The candidate with the greatest youth support has greater chances of winning, not only because of the sheer size of the youth vote, but also because of their persuasive power. People listen to the young, because it is their future at stake,” she said.

Despite the fact that she has yet to release campaign advertisements, Santiago said her victory in the mock elections validates the results of a Facebook-based survey where she also emerged as winner, with 48.36 percent of respondents favoring her.

The Commission on Elections has said that at least 54.6 million Filipinos registered to vote in next year’s presidential elections. Based on this record, 20 million of them are aged 18 to 35 years.

“That means that even only 75 percent of youth votes can give a candidate 15 million, close to the number that made Benigno Aquino III president in 2010,” the senator said. RAM