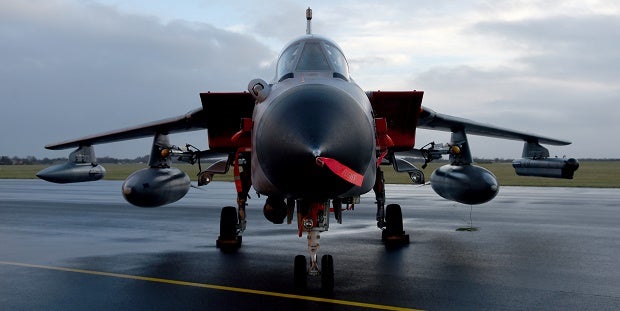 A ‘Tornado’ aircraft ‘ of the German Air Force photographed at the airbase in Jagel, Germany, Friday Dec. 4, 2015 . German lawmakers on Friday overwhelmingly approved a broad noncombat mission to aid the fight against Islamic State militants, including sending reconnaissance jets and a frigate following a call from France for support following last month’s deadly attacks in Paris. AP

BERLIN — Germany stepped up its contribution to the fight against the Islamic State group on Friday, with lawmakers overwhelmingly voting in favor of sending reconnaissance jets, a tanker plane and a frigate to provide broad noncombat support to the US-led coalition flying airstrikes against the militants.

The move answers a call for help from France following last month’s deadly attacks in Paris. IS militants claimed responsibility for the Nov. 13 attacks that killed 130 people and wounded hundreds.

On Friday, Belgian and French authorities said they were hunting two new suspects in the Paris carnage. The men used fake identity cards and sent money to a relative of the man who orchestrated the attacks the day before the ringleader died in a shootout with French police, the Belgian prosecutor’s office said.

The German Parliament voted 445 in support of the mission against IS and 146 against, with seven abstentions. The plan received wide support from the ranks of Chancellor Angela Merkel’s governing coalition, a week after the German leader assured French President Francois Hollande that Germany would “act quickly” to help its ally.

German opposition lawmakers, however, questioned the effectiveness of military operations against the extremists. “You won’t fight IS that way. You’ll only strengthen it,” Left Party lawmaker Sahra Wagenknecht told Parliament.

Her criticism echoed the concerns voiced by Nicolas Henin, a French journalist who was held hostage by Islamic State militants for 10 months until being freed in April 2014. Henin told The Associated Press that while using military muscle against the group shouldn’t be ruled out, it should only be a small part of a broader strategy.

“The goal… is to fight and contain IS, and destroy their safe havens and their ability to lead worldwide terror operations,” Defense Minister Ursula von der Leyen told reporters Thursday before heading to Ankara for talks with her Turkish counterpart.

She also met with Turkish President Recep Tayyip Erdogan to talk about stationing German troops there and other aspects of the deployment, the Defense Ministry said Friday.

In all, Germany plans to send up to six Tornado reconnaissance planes and a tanker aircraft, as well as the frigate to help protect the French aircraft carrier, but won’t actively engage in combat.

A maximum contingent of 1,200 soldiers was also approved, serving as support troops in Turkey and elsewhere, including at headquarters operations in Qatar and Kuwait. The German mission is open-ended, but needs annual parliamentary approval.

An association representing active and former members of the German military said it wouldn’t discount the possibility that Germany might eventually send ground troops to Syria. “A few weeks ago the government had also ruled out an active role of the air force against IS, and we know where things stand now,” the chairman of the German Bundeswehr Association, Andre Wuestner, told public broadcaster Bayerischer Rundfunk.

But Merkel’s government reiterated that the mission was one of noncombat support.

“There’s nothing in this mandate about the deployment of ground troops,” the German leader’s spokesman, Steffen Seibert, said. “It’s not planned, and nobody in the German government is planning it.”

Meanwhile, Hollande visited the Charles de Gaulle, France’s only aircraft carrier, in the eastern Mediterranean where it was dispatched a week before the Paris attacks. The French carrier has been launching raids against Islamic State bases as part of the US-led coalition’s strikes against the group — 110 sorties so far. It carries 2,000 people on board.

British jets flew their first missions as part of the coalition’s anti-IS efforts on Thursday, striking oil fields in eastern Syria that help finance IS.

On Friday, the Belgian federal prosecutor’s office said authorities were searching for two new suspects in the Paris attacks.

The men, carrying bogus IDs in the names of Samir Bouzid and Soufiane Kayal, were traveling in a Mercedes with another Paris attacks fugitive, Salah Abdeslam, when the car was checked Sept. 9 at the Hungarian-Austrian border, the prosecutor’s office said in a statement.

It said the Kayal ID was also used to rent a house in the Belgian town of Auvelais that authorities have searched as a possible site for making the suicide bombs used in the Paris attacks.