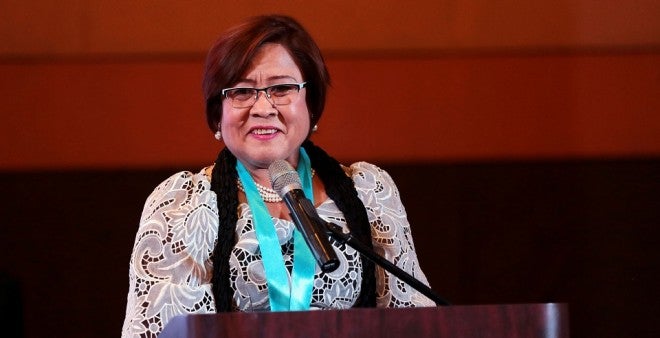 CEBU CITY—Former Justice Secretary Leila de Lima expressed hopes that the disqualification cases filed against Sen. Grace Poe would be resolved with finality before the printing of ballots for next year’s elections.

Ultimately, the disqualification cases against Senator Poe will be elevated to the Supreme Court. It would not be good that the ballots are printed with her name on it and later she will be disqualified by the Supreme Court, said De Lima, who was a speaker at the 3rd Liga ng mga Barangay Convention of Southern Leyte at the Cebu Parklane International Hotel.

Poe has filed a certificate of candidacy for President in next year’s elections.

De Lima told reporters she was anxious about what might happen in case Poe gets the most number of votes in the elections but ends up disqualified: “If the issues are not resolved and Grace Poe wins, it would create some instability. If she wins but gets disqualified, would the second-placer take her place or will there be a special elections?”

An old Supreme Court ruling states that the person who got the second highest number of votes can never take the place of the proclaimed winner, De Lima said. But that jurisprudence had been changed with another one that says the second-placer can take the place of a disqualified winner, she added.

De Lima said anyone who wants to be the next President should meet all the qualifications. This is “a fundamental constitutional issue,” she said.

Poe, who had spent time in the United States before returning to the country, was disqualified by a division of the Commission on Elections (Comelec) last Tuesday for failing to meet residency requirements. The decision has yet to be affirmed by the commission en banc. It may also be questioned in the Supreme Court.

The Comelec’s Second Division, which acted upon a complaint filed by lawyer Estrella Elamparo, ruled Poe was two months short of the required 10-year residency requirement provided in the Constitution.

Poe claimed she could present additional documents to prove she met the residency requirements.

Earlier, the Senate Electoral Tribunal (SET) dismissed a disqualification case filed against Poe by Rizalito David that questioned the natural-born citizenship of Poe, who is a foundling.   Voting 5-4, the SET ruled in favor of the presumption of natural-born status of foundlings. With Carla P. Gomez, Inquirer Visayas