PARIS — A cafe where five people were killed by a squad of Islamic extremist gunmen terrorizing central Paris reopened for business Friday. 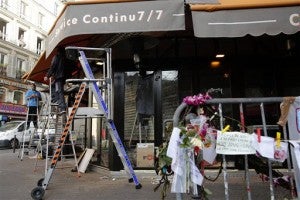 Men repair the front side of  “La Bonne Biere”, one of the establishments targeted during the November 13 Paris attacks. The cafe reopened on Friday, Dec. 4. AP Photo

La Bonne Biere, a corner cafe in the trendy central Paris district targeted by the gunmen, opened early in the morning. Since the attacks, the shuttered cafe has been piled high with flowers, like the other sites of the Nov. 13 attacks that left 130 people dead.

Paule Zlotnik, a neighboring shopkeeper, praised the decision: “It’s time they open and that we continue life as it was before.”

In surveillance video seen by The Associated Press, two gunmen in black calmly approached La Bonne Biere that night, firing deliberately on the outdoor tables before turning back toward a car that can be seen rolling slowly behind them.

Arriving to chair the meeting, Luxembourg Deputy Prime Minister Etienne Schneider said “If we don’t get agreement today, it will be extremely difficult to get any agreement at all.”

Experts have narrowed down differences between security concerns and privacy rights but could not agree on whether to store the traveler information for six months, or nine months as France demands.

French Interior Minister Bernard Cazeneuve described the system as “indispensable in the fight against terrorism.”

Read Next
Thailand receives Russian warning of Islamic State threat
EDITORS' PICK
Congress canvassing of votes for president, VP to begin May 24
Luxe property: A way to build, preserve wealth
House energy committee chair Arroyo bats for cheap electricity
PH detects local transmission of Omicron subvariant BA.2.12.1
Honolulu Café is the cure for your Egg Tarts and Roastings cravings
Petition to reverse Comelec decision on Bongbong Marcos’ DQ case reaches SC
MOST READ
Heart Evangelista gets a ‘no’ from Chiz Escudero after asking, ‘Do I deserve a bag?’
CebuPac places pilot under disciplinary review after ‘baseless’ post vs Robredo
Closure order vs Megaworld Corp halted as firm vows cooperation with BIR – exec
Man posing as Marcos spox revealed to be an inmate in Bilibid — Guevarra
Don't miss out on the latest news and information.