In crowded Hong Kong, dead find no space to rest in peace 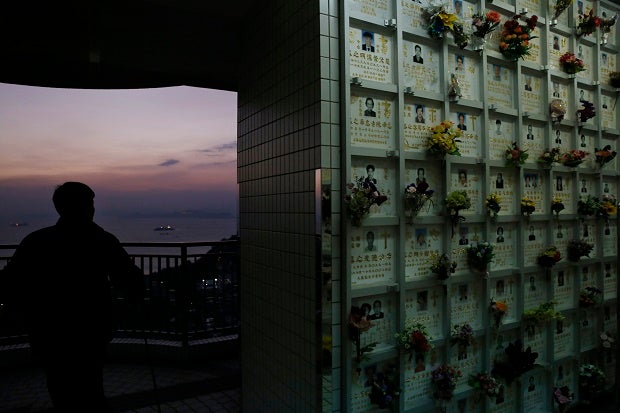 In this Nov. 22 photo, a man walks past a wall of niches for cremated remains in the background at a public columbarium in Hong Kong. In tightly-packed Hong Kong, the dead are causing a problem for the living. Limited land to build on and soaring property prices mean Hong Kong is fast running out of space to store the dead. AP

HONG KONG — In tightly-packed Hong Kong, the dead are causing a problem for the living.

After Chui Yuen-sing’s mother died in April, she was cremated and her ashes put in storage while he tried to find a final resting place. He was willing to wait up to 18 months for a pigeonhole-like “niche” in a memorial building. If none was available, he was considering putting them in mainland China, where his father’s ashes are already stored, or taking an even more drastic step that conflicted with Chinese tradition.

“Maybe I would have scattered my mom’s ashes in a public park,” the retired university lecturer said. “But if I used this method then in my heart I probably wouldn’t feel very good,” he said. “Chinese people think that you should be buried in the ground to find peace.”

Chui’s choices highlight the long-running struggle to find enough space to accommodate both the living and the dead in the cramped southern Chinese city of 7.2 million. Limited land to build on and soaring property prices are colliding with a tradition of visiting grave sites on “tomb sweeping” holidays to burn incense and pay respects to venerated dead ancestors.

Hong Kong’s aging society means the problem will get worse. The number of senior citizens is expected to rise from 15 percent of the population in 2014 to nearly a quarter by 2024. The number of deaths each year will rise from 42,700 in 2010 to 50,300 by the end of the decade, according to government forecasts.

In the 1960s, administrators of Hong Kong, which was then a British colony, began encouraging cremation to ease the strain of a fast-growing population on space-starved cemeteries. Now, the cremation rate has risen to about 90 percent.

To store the ashes, the government builds large structures known as columbariums that have tens of thousands of niches for urns as well as furnaces to burn paper money and other offerings. But supply hasn’t kept up with demand.

“When the government holds consultations, residents of every district oppose building it in their neighborhood. Every area says no,” Lam said.

Part of the reason is that columbaria draw huge crowds of people during tomb sweeping holidays, causing big traffic jams and air pollution from the paper offerings being burned

Families face a waiting list of up to six years for a government-provided niche, so some turn to private providers, including more than 120 that have been deemed illegal.

Since 2007, authorities have also been promoting “green” burials by scattering ashes at sea or in 11 gardens of remembrance. But such practices conflict with Chinese traditions that hold that burying remains in an auspicious spot on a mountainside or near the sea are vital for a family’s fortunes.

The government has been trying to change attitudes with educational videos and seminars at retirement homes. It’s even set up an electronic memorial website where families can post photos and videos of the deceased and send electronic offerings of plums or roast pork. Interest remains limited, with green burials rising from a few dozen in 2005 to only 3,553 last year.

“In the first year everybody said I’m crazy,” said Betsy Ma, Sage’s sales director, who had her father’s ashes made into gems that she wears in her earrings and necklace.

Many Chinese believe that carrying human remains as jewelry or storing them at home will attract ghosts, said Ma. Still, in the past year the procedure has gained in popularity, she said.

Government auditors said this month that Hong Kong faces an “acute shortage” of niches over the next three years because of project delays and a government plan to regulate private operators.

The new law, expected to take force next year, is aimed at better managing private operators, which frequently violate land-use rules or safety codes. Some entrepreneurs spot an opportunity to modernize a market dominated by small, old-fashioned operators.

“There will be a new generation of high class columbariums coming up,” said Francis Neoton Cheung, a former urban planner and chairman of Life Culture Group, which invests in columbarium projects.

One company he has worked with, Kerry Logistics, is proposing converting a 15-story waterfront warehouse into a modern columbarium.

The HK$2 billion project will have 82,000 niches opened by smartcards and video screens showing photos and movies of the deceased and high-tech air filtration to cut pollution from burning joss sticks and paper offerings. However, the company has yet to secure planning approval after local residents objected.

“There’s never enough supply. For some people it causes great hardship,” he said.

Chui, was one of about 9,480 people who applied for 3,256 new niches offered in October from the Board of Management of Chinese Permanent Cemeteries, a private group.

He got lucky, winning a family niche. He plans to bring his father’s ashes back from mainland China so that his parents can be together.