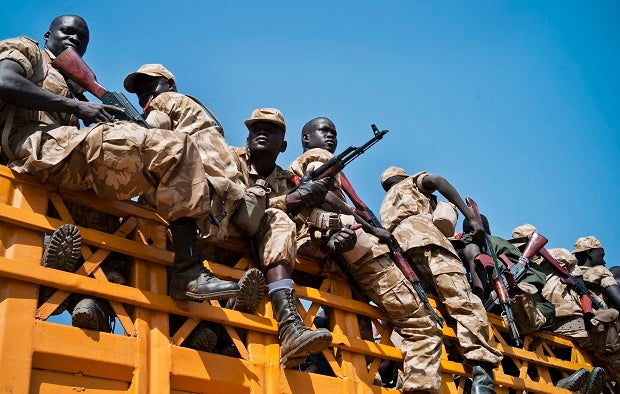 In this Monday, Jan. 13, 2014 file photo, some of hundreds of government soldiers board trucks and pickups, to head to the frontlines to reinforce other government forces already fighting rebel forces near the town of Bor, as they prepare to leave from the outskirts of Juba, South Sudan. A long-awaited report by African Union investigators, released lated Tuesday, Oct. 27th, 2015 says mass graves have been discovered in South Sudan, cites horrific crimes against civilians including forced cannibalism, and disputes that there was a coup attempt by former Vice President Riek Machar in December 2013, finding that the conflict began with a skirmish between members of the presidential guard in the capital Juba. AP FILE PHOTO

UNITED NATIONS — A peace deal signed in August by South Sudan’s feuding leaders is at “a critical juncture” with repeated violations by both parties in multiple parts of the country, the UN peacekeeping chief said Wednesday.

Herve Ladsous told the Security Council that implementation of the agreement “is progressing slowly and with serious difficulties,” as both sides continue to fight to try to improve their military positions.

He urged the council and key international parties “to invest politically in supporting the take-off of the transition” by supporting key institutions in the peace agreement to oversee its implementation, provide security, and coordinate the movement of forces allowed to remain in the capital, Juba.

Otherwise, Ladsous warned, “the progress made could be lost.”

South Sudan has been at war since December 2013 as government forces loyal to President Salva Kiir, an ethnic Dinka, battle rebels led by his former deputy, Riek Machar, a Nuer. The fighting, which has often been along ethnic lines, has killed tens of thousands of people, displaced over two million, and created a humanitarian crisis.

He said the government stands ready to form a national unity government as soon as “all our brothers and sisters” who support the other side “join us in Juba, hopefully soon.”

As the peace agreement is implemented, Deng said the government and the UN peacekeeping mission in the country should encourage tens of thousands of civilians who have taken refuge at UN-protected sites to return home.

The Security Council urged both sides to form a transitional government “which is now overdue, without delay.”

Unicef: 129 children killed in South Sudan fighting in May