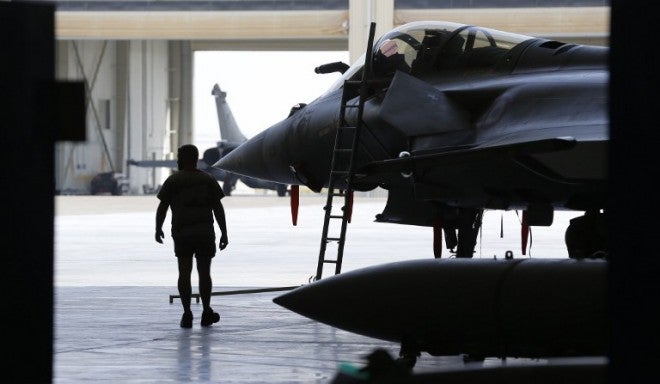 A French soldier prepares a Rafale fighter jet at a military base at an undisclosed location in the Gulf on November 17, 2015, as the French army conducts operations against the ISIS group in Syria and Iraq. French warplanes destroyed a command center and training center in the Syrian city of Raqa, the stronghold of ISIS, in its second series of airstrikes in 24 hours, the French defence ministry said. The British parliament has voted for the United Kingdom to join the airstrikes against ISIS. AFP FILE

The move proposed by Prime Minister David Cameron’s government was approved by a clear majority of 174 MPs, with 397 voting in favor and 223 voting against.

The vote in the House of Commons came after over ten hours of often heated debate.

British planes could now be poised to join air strikes on jihadist targets in Syria within hours.

Cameron had wanted to extend Britain’s role in the fight against ISIS for months but made a fresh push for the vote in the wake of the Paris attacks last month.