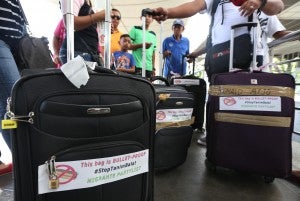 MANILA, Philippines — Nearly a hundred personnel of the Aviation Security Group (Avsegroup) are being investigated, primarily for their alleged failure to report cases of ammunition interception at the Ninoy Aquino International Airport (NAIA).

A dozen of these Avsegroup men, a source told the Philippine Daily Inquirer, apparently acted as arresting officers in bullet interception cases, which went unreported. The 12 Avsegroup men, who each handled at least 40 cases, are the subject of deeper scrutiny and have been disarmed and reassigned to the unit’s headquarters.

According to the source, who asked for anonymity for not having been assigned to speak on the matter, 89 Avsegroup personnel are being investigated about the huge discrepancy between the number of reported cases with the Office for Transportation Security (OTS) and the police numbers at the NAIA of passengers being stopped for carrying bullets from January to September this year.

The OTS reported 1,212 incidents at the NAIA of ammunition interception during the period. Out of the number, only 51 cases were referred to the Avsegroup-National Capital Region (NCR) for the filing of charges.

“The investigation on the 89 personnel is meant to determine why there is such a large discrepancy in the data,” the source said.

Most of the 12 personnel with large numbers of arrests were assigned at the NAIA terminal 3, the rest were previously at terminals 1 and 2. He pointed out that the 77 remain in their respective assignments at the terminals.

While two of the officials were removed from their posts for command responsibility in the failure of their personnel to report incidents of ammunition interception, the rest of the Avsegroup personnel were investigated on allegations of extortion from the so-called “tanim-bala (bullet-planting) scheme. They include SPO1 Rolando Clarin; SPO2 Romy Navarro, Chief Insp. Adriano Junio; and Juaneza, who were accused of allegedly extorting money from American missionary Lane Michael White.  SFM