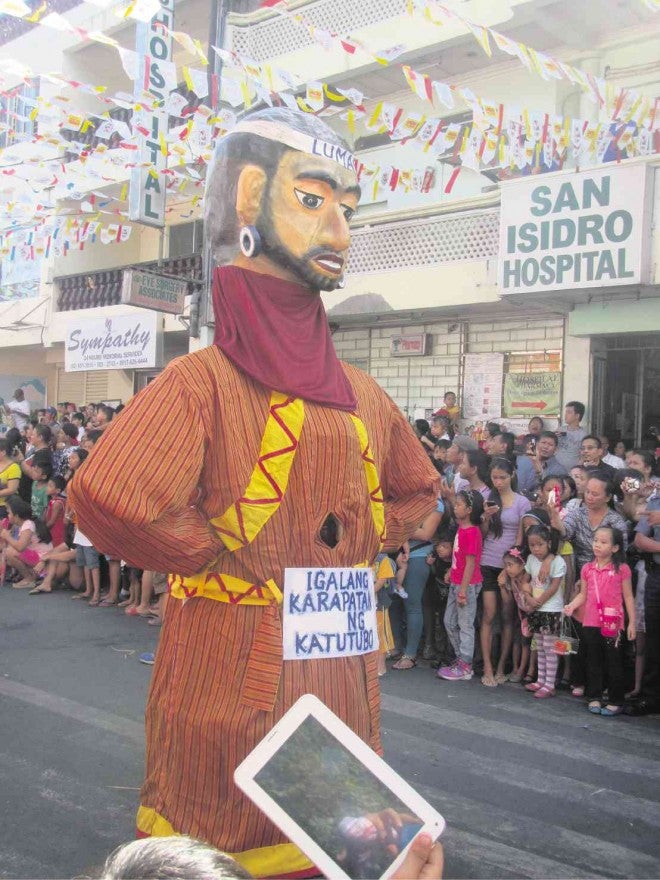 POLITICAL STAND. A giant papier-mâché creature dressed like a “lumad” and calling for respect the rights of indigenous peoples is among the figures that joined the Higantes Festival in Angono, Rizal province. Mariejo Mariss S. Ramos

For only two days in a year, Anj Eder, 21, would rather be in Angono, Rizal province, than elsewhere. She stays in Makati City to work in an advertising agency but makes it a point to be in her hometown for its Higantes Festival every Nov. 22-23.

After all, she has never missed a single celebration since she was old enough to remember.

“Growing up in Angono, you would really want to participate in the town fiesta—the costume you wear under the heat of the sun for two straight days is no bother. Even the different barangays are competitive and the people themselves are art,” Eder said.

The festivity cannot be mistaken for an ordinary day. Street embellishments are not just colorful banderitas but also people of all ages lined up in anticipation.

In almost every famous landmark, one could spot the giant human papier-mâché creatures—the famous higantes (giants)—made of bamboo and donned with vibrant clothes reminiscent of traditional Filipino rural life.

Their parade on the streets is usually held on the eve of the Catholic fluvial procession of the town’s patron, St. Clement, across the Laguna de Bay. But this year’s Bisperas Mayores, higantes from different organizations joined marching bands in the grand morning parade. The way the art figures look has also evolved, but most still have big heads marked by the iconic smirk and arms akimbo.

The art has come a long way from its roots, first used as an effigy of an abusive Spanish landlord in town. Now, artists have departed from the traditional “Pamilya ng Higante,” a three-piece set of mammoth figures representing a mother, father and child, to pieces that reflect modern times.

While some might be mistaken for the mascots of a telecommunications company or a major supermarket—a medium for blatant advertising—others weren’t shy about carrying a political standpoint. One figure was dressed like a lumad and carried a sign on the chest that read “Igalang ang karapatan ng mga katutubo (Respect the rights of indigenous peoples).”

Angono, a first-class urban municipality (annual income: over P55 million), is situated 29 kilometers from Metro Manila. It was once a barrio of its neighboring towns, Taytay and Binangonan, before being legally proclaimed an independent municipality in 1938 by then President Manuel L. Quezon.

Before, a travail of dirt roads welcomed tourists; now they pass through a national highway and asphalt streets.

With the continuous expansion of Metro Manila, Angono is now part of the “peri-urban” fringe, gearing toward an industrially developed area. Changes abound and the town is on its way.

For a millennial like Eder, it is not hard to trace the changes. She noted the establishment of SM Center Angono as a key moment of transition. Later, several business establishments have sprouted around town.

The feast of St. Clement used to be a celebration for bountiful fishing harvest, but it has evolved into a form of gratitude for the kind of progress linked to urbanity. “Some old things in Angono were no longer there, but new things are being added. It’s like culture, it grows,” Eder said.

With Angono, there is more than one way of looking. To an outsider, the “Art Capital of the Philippines” is simply the home of two national artists—painter Carlos “Botong” Francisco and composer Lucio San Pedro.

But it’s so much more than the famous names. For the townspeople, art has three forms: as community, as family and art for art’s sake.

“If you ask us who is the artist we know, we will probably not have Botong on top of our minds. We could give you a long list of names. It just shows the volume of artists in Angono. You can’t single out a name,” Eder said.

True enough, art in Angono has been shaped not by individual artists but families of artists, most famous of which where the Tiamsons, Blancos and Vocalans.

In 1982, the late artist Perdigon Vocalan and his spouse opened Balaw-Balaw Restaurant and Art Gallery. The famous landmark boasts of over 100 easel paintings of Vocalan which portray Filipino folkways, such as prominent figures “Malakas and Maganda.”

Intricate sculptures of legends, fairies and nature scenes have made the gallery a sanctuary of Philippine cultural heritage.

Balaw-Balaw also features works by Vocalan’s two sons, Rembrandt and Andre. Rembrandt is a member of Neo-Angono Artists Collective, a movement and organization of artists, while Andre is usually seen in the kitchen as marketing and operations head of the restaurant.

“During ‘ber’ months, a lot of people come here. On regular months to June, there are just few visitors,” Andre said.

On the first day of the feast, the place was jam-packed. Now tasked to supervise the place, Andre knows clearly that the strength of their art lies not on the individual but on family tradition—the reason they try to pass on the love for art to the younger generations by holding free workshops there.

But perhaps no other family in Angono is as prolific as Jose “Pitok” Blanco and his family of painters. The works of his children—Glenn, Noel, Michael, Joy, Jan, Gay and Peter Paul—are displayed in Blanco Museum, built in 1980 and spanning five decades of family art history in the style of realism.

The Blancos were also the first to hold a family exhibit at the National Museum in 1978.

In Angono, art runs in the blood. Or could it be something else? “It’s something in the water,” Eder said. “I might check what’s wrong with our water pipe soon,” she joked.

What happened to the kin of Botong Francisco? The answer is just a doorbell away.

Tucked in the narrow street of Doña Aurora in Barangay Poblacion Itaas, Carlos Botong Francisco Gallery appears to be a small nook from the outside, whose entrance is just a tiny glass door. The façade has no embellishments; it looks like a typical gallery.

Francisco’s great grandson, Carlos “Totong” Francisco II, greet visitors and allow them to freely explore the place that unfolds precious memorabilia of the national artist—from his old shoes to cameras, photographs, caps and books. Totong, also an artist, is the only one who followed in his footsteps.

The Second Gallery’s setting is informal. Traces of unfinished art—paints, brushes and canvasses—are not kept hidden. There is no entrance fee, but a small clay jar has been placed beside the door for donations.

Angono residents exude the spirit that the chief aim of a work of art is the self-expression of the artist. Ordinary houses and even sari-sari stores willingly lent their gates, fences and walls to concrete murals made by artists who don’t even ask for a single penny for their work. Art is engraved in the community—literally and otherwise.

“I grew up in museums and art streets, but I took them for granted. Now that I’ve grown up, it made me appreciate culture and how it is a social fabric; it draws people together. Art in Angono is a means of connection,” Eder said.