15 Bantayog honorees join others on The Wall

THIS YEAR’S Bantayog ng mga Bayani honorees comprise a big batch—15 in all. Seven died in Mindanao, four in the Visayas and four in Luzon.

Of the 15 honorees, 12 died during the martial law years under the Marcos dictatorship. Three died after freedom was restored in 1986.

The conferment of honors will be held at 4 p.m. today at Bantayog Memorial Center located near the intersection of Edsa and Quezon Avenue.

Supreme Court Justice Marvic Leonen will be the guest speaker.

The project, organizers said in a statement, was “a response to recent attempts by certain groups to rewrite Philippine history, to confuse the young generation about the truths of the Marcos dictatorship, to erase its horrors, abuses and deceptions and to have [it] remembered as a ‘golden era’ in the Philippines.”

Bantayog is preparing to launch new activities that will include publishing biographies, dissemination of informative materials, film showings, roving exhibitions and museum tours.

The honorees’ names, age, year and place of death are: 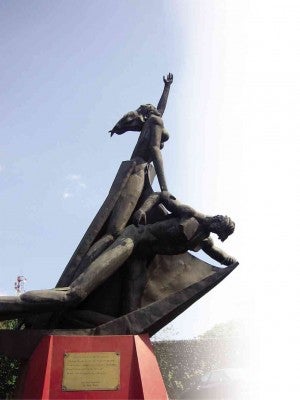 THE BANTAYOG monument honors martyrs who fought for freedom in the country. CERES P. DOYO

From gov’t to underground

Kintanar, a teacher and activist during martial law, was among those who died in the sinking of the MV Cassandra in 1983.

Nine honorees, Salac among them, died in military operations. He spent time in the underground during the martial law years. The priest was involved in the peace process in Mindanao in 1987 when he was killed during a military attack.

Morales was the most well-known of the 15 because of his dramatic repudiation of the Marcos regime that he served and his joining the underground movement. Hunted during the martial law years, Morales spent several years in detention.

An economist, Morales served in several government positions during the post-Marcos years. He died a natural death in 2012.

The biographies of these honorees will be posted on the Bantayog website (www.bantayog.org).

All of them were opposed to the regime of dictator Ferdinand Marcos and are considered freedom advocates.

The way they lived and died varied but they had a heroic streak that made them worthy to be included on the list of names on the Wall of Remembrance.

The 2015 honorees bring to 268 the names engraved on the Wall, which stands a few meters away from the bronze monument created by renowned sculptor Eduardo Castrillo.

The monument depicts a defiant mother holding a fallen son.

The monument, the commemorative wall and other structures at the Bantayog complex are dedicated to modern-day martyrs who fought to help restore freedom and democracy in the country.

Bantayog hopes to spread lessons from the martial law period and “to have issues related to it included in the national debate during the 2016 electoral campaign,” the event organizers’ statement said.

It hopes to counter the “historical deception and mass forgetting of the sins of the dictatorship” so that “Philippine politics and the writing and learning of Philippine history will be the better for it,” the statement added.

The Bantayog complex now includes a P16-million building, which houses a small auditorium, library, archives and a museum.

Bantayog’s 1.5-hectare property was donated by the administration of then President Corazon Aquino, through Land Bank of the Philippines, the year after the dictatorship was toppled and Aquino was swept to the presidency in 1986.

Every year, names are added to the Wall of the Remembrance.