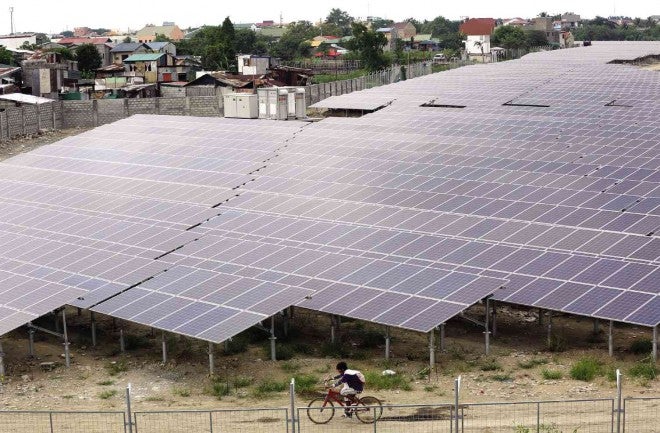 HARVESTER OF LIGHT. A total of 32,000 solar panels have been installed on a 12-hectare reclamation area in Barangay Isla, Valenzuela City. NIÑO JESUS ORBETA

From a fish pond to a solar power farm.

Valenzuela City will inaugurate today what is considered the largest in-city solar power farm in the country, which will provide not only an alternative source of energy but also employment for local residents.

The Valenzuela Solar Energy Inc. has installed a total of 32,000 solar panels on a reclaimed 12-hectare land in Barangay Isla—an area that used to be a fish farm. The facility, which started construction seven months ago, is expected to be fully operational on Dec. 14, according to the company engineer, Edwin Chao.

Using Suntech solar panels from China, the solar farm can generate 8.6 megawatts, which will be sold to the Manila Electric Co. (Meralco). The panels cost around P12,000 each, said Therese Dizon of the city’s Public Information Office.

Dizon said the solar farm project was in line with Mayor Rex Gatchalian’s key visions for the city that focus on housing, education, health and social welfare, job generation and trade and industry.

According to Joeven Go, assistant project manager of Valenzuela Solar, the project is the company’s very first and that the city was chosen as the site because of its vast open spaces.

Meralco has the discretion to distribute the energy produced by the solar power farm, Go added.

Also benefiting from the technology is Barangay Isla Elementary School, to which the company will donate solar panels as a way of giving back to the community, said the village chair, Joel Santiago Angeles. The number and size of panels suitable for the school are still being determined, he added.

“There will be a double-throw switch for the school. The electricity supply will come from the solar panels in the morning and from Meralco in the evening,” Angeles said.

“This is a pilot run for the solar farm. If the venture succeeds, there is a possibility that more Valenzuela schools will be using solar technology,” he added.

The solar farm has already provided at least 80 jobs for residents related to construction, maintenance and gardening. Starting December, thirty more people are expected to be directly employed by the project, he said.

“I am happy that they constructed a solar farm in our city. I will not allow developers to turn that idle land into a warehouse or factory which can add to pollution,” Angeles said. “I just wish Valenzuela residents can also get discounts from Meralco since the solar farm is located in our city.’’

Sunday’s inaugural can cap a particularly fruitful year for Valenzuela. In September, the city was cited by Galing Pook Foundation as one of the 10 local government units with outstanding governance programs.

Valenzuela was also hailed as the “most business-friendly” among highly urbanized cities in the country in 2012, 2014 and 2015 by the Philippine Chamber of Commerce and Industry, thus entering the award-giving body’s Hall of Fame.