Several environmental groups on Saturday held a climate march in Quezon City, just days before the start of the climate change negotiations in Paris.

The March for Climate Justice, which was attended by around 15,000 people according to the organizers, filled all 8 lanes of the Elliptical Road as they marched around the QC Memorial Circle.

Simultaneous marches were also held in other parts of the country.

“The Filipino marchers set out a call for climate justice in behalf of vulnerable nations like the Philippines, and to demand a strong, fair and ambitious global climate agreement ahead of the international UN climate talks that will start on Monday, November 30,” the organizers said in a statement.

They said they consider the 21st Conference of Parties (COP21) in Paris a “once-in-a-lifetime opportunity to take action.” 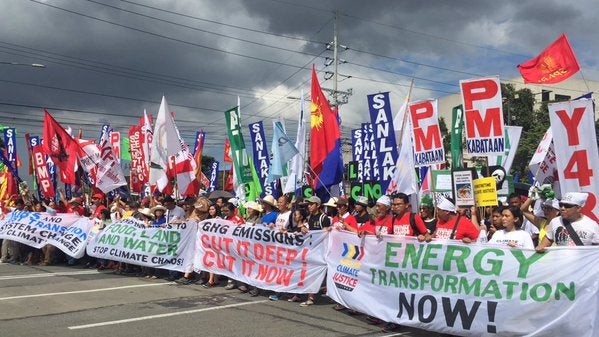 Fr. Edwin Gariguez. Secretary General of the Catholic Bishops’ Conference of the Philippines’ National Secretariat for Social Action (CBCP-Nassa), said climate justice is part of the teachings of the Church. Citing Pope Francis, he said, “The cry of the earth is the cry of the poor.”

(As one Philippines, let us join the worldwide calls for our governments to solve and address the problems affecting our climate.)

Meanwhile, Sr. Eden Panganiban, provincial leader of the Missionary Sisters Servants of the Holy Spirit, said the COP21 serves as an “ultimatum.

(If nothing will happen, we will have no future. That is why we should continue our collective action. We are one with the world and those marching in Paris.)

Among the aims of the COP21 is to finalize a legally-binding agreement on how to address climate change, as well as reduce greenhouse gas emissions and limit global temperature rise by two degrees Celsius above preindustrial levels.

READ: What I expect from Paris climate change meeting

Dantes, who is one of the leaders of the #NowPH (Not On Our Watch) campaign, said the youth should be involved in climate change discussions.

READ: Millennials tapped to talk about, act on climate change

(We know that the issue of climate change affects all of us, that is why we need let most especially our leaders hear our voice.)

He said they should drum up support as world leaders discuss the issue of climate change and work on a legally-binding agreement.

(The security of our future is important, especially the future of the youth.) IDL