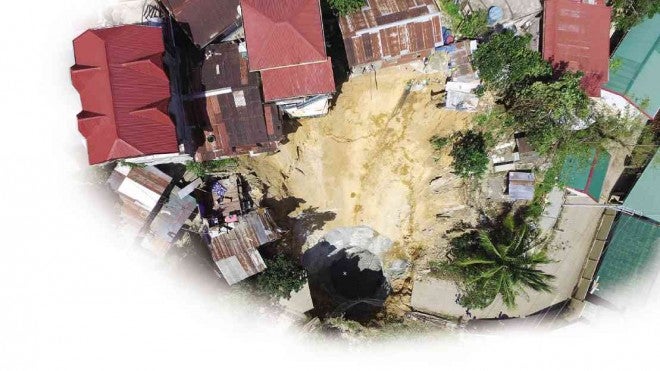 SEVEN houses fell into this massive hole that opened up on Oct. 22, drawing the attention of geologists from the University
of the Philippines. ELIZA CONSUL/CONTRIBUTOR

BAGUIO CITY—Geologists from the University of the Philippines are conducting an independent investigation of a mysterious “sinkhole” that opened up beneath a residential area in the mining town of Itogon, Benguet province, swallowing seven houses in October.

Dr. Carlo Arcilla, director of the University of the Philippines National Institute of Geological Sciences (UP-NIGS), led a team to the 20-meter void beneath a populated hillside in Barangay Virac in Itogon, near one of the country’s oldest mines.

Benguet Rep. Ronald Cosalan said he requested the team to take a second look at the hole, which was so deep there were no traces of the first houses that fell on Oct. 22.

The seventh house appeared to have plugged the hole.

The Itogon government had established a danger zone around the hole and had relocated 166 households from the area.

Government geologists have completed their own investigation and have submitted their findings for review to Leo Jasareno, national director of the Mines and Geosciences Bureau (MGB).

Earlier, MGB geologists hiked through several underground tunnels, some dating back to the start of pioneer mining in Benguet, to seek  the source of the void.

Benguet has been host to some of the oldest mines, many of them still operating today.

According to an initial report, the geologists found a breach in one of two old diversion tunnels, which a mine uses to redirect river water from its waste tailing dams.

But the tunnel was too far from the Virac hole, according to MGB Cordillera Director Fay Apil. The geologists at the time also did not detect signs of debris from the houses that fell into the hole.

Apil said the void was not technically a natural sinkhole, which is created when underground water gradually cuts through lime stones over a long period.

The UP investigation coincided with this year’s National Mine Safety and Environment Symposium here which also discussed how the Masbate gold project, operated by Filminera Resources Corp., dealt with sinkholes in its operations.

In a paper she presented to the symposium on Nov. 19, Lovely Capulong, Filminera mine engineering superintendent, said the project site in Aroroy town in Masbate discovered the “voids” into which earth-moving machines and a 100-ton truck fell in 2012 and 2013.

The Masbate gold project, an open pit mine, is operating on land that had been mined for centuries since the 1900s, Capulong said, adding that this may account for the surface holes.

Voids, she said, are open cavities underground, some of which were abandoned by previous mine workers. Some of the voids were filled by Filminera’s predecessors but underground erosions reopened some of these through the years, “and as our mining operations progressed,” she said.

One of most recent voids measured 14 meters wide and 35 meters deep. “That depth [is equivalent] to a 10-story building,” Capulong said.

“These voids became potential hazards to our mine site,” she said, so Filminera turned to its predecessors’ work maps to develop a model detailing the likely locations of underground cavities.

Each step the mine engineers took since then involved risk assessments, aided by a cavity automatic laser scanner, Capulong said.

Mine areas that are too risky due to the instability of the voids are marked with hazard signs and segregated, she said.

Uncovering, revealing and even closing these voids have been “tedious and costly” for the company, she said.

“To date, open pit mining at the Masbate gold project has excavated through 10.4 kilometers of underground workings over five years without injury to personnel or significant equipment damage,” she said. Vincent Cabreza, Inquirer Northern Luzon