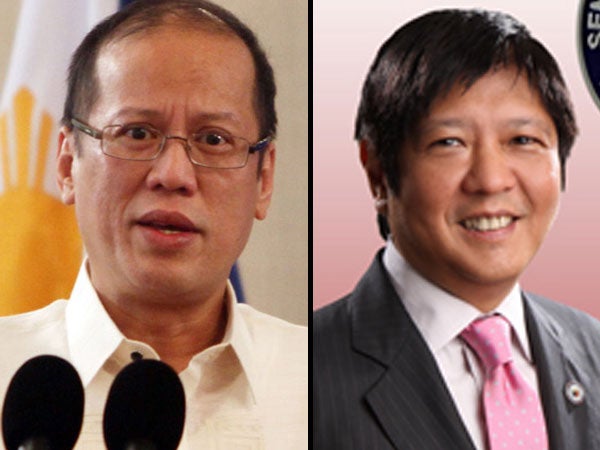 “When you cannot admit a mistake, are you not guaranteeing the repetition of that mistake?”

Thus said President Benigno Aquino III during the launch of the book “The Aquino Legacy: An Enduring Narrative” at Raffles Hotel in Makati City on Thursday.

“There is a particular candidate for next year’s elections, who says repeatedly that he is ready and willing to say sorry, if only he knew what there is to apologize for… Perhaps this book can help to enlighten him and add to his knowledge of our past.”

Aquino previously said that the dictator’s children should apologize for the crimes of atrocities and transgressions committed during the regime of their father. But in earlier pronouncements, the senator maintained that he has nothing to apologize for: “What am I to say sorry about?” Marcos said in a television interview.

Noting that the past “holds meaning for all of us in the modern day,” Aquino emphasized the challenges that his mother faced during the “dark days” of martial law in restoring democracy from the “iron fist” of the Marcos patriarch. But he admitted that the book was written with personal bias based on the title alone.

“This book is meant to remind present generations of how millions of Filipinos took a stand against the dictatorship. My parents are perhaps the most prominent examples of that. As such, by its very nature, this book will be an intensely personal read. In documenting the events that shaped our nation, so too does it provide a closer look at our family—at the normal lives we tried to lead in spite of extremely extraordinary circumstances, and at the lessons and principles that continue to guide us to this day,” Aquino said.

While acknowledging the fact that there are many accounts of history, the President also warned against those who spread propaganda and tweak historical narratives for personal gains.

“All accounts of history are written with the personal biases and views of the authors. What is truly important is the fact that we are adding to the body of knowledge available at this point: we are making sure that no single person is able to dictate history, and consequently, influence the thinking of Filipinos. We are making sure that the whole picture is available, as opposed to what can only be called propaganda,” Aquino said.

“To those of us who consider selves as centrist or centrist ideology, which means we get the best input from the extremes, an often repeated conversation is that there is a dearth of history from our point of view, and given that dearth or the vacuum there is, those who were not participants or perhaps condemned to just rely on the viewpoints of those who have separate agendas and therein lies the danger and I have to repeat: we forget the past, we are condemned to repeat the same mistakes,” he added.

Bongbong Marcos is right: Why should he say ‘Sorry?’

Read Next
8 gunmen carrying ISIS flags killed in clash in Sultan Kudarat town
EDITORS' PICK
New Year, New Rediscoveries
Acer Philippines welcomes you to its first flagship store
Is your company a growth champion? Stand up and be recognized!
4 senators want military, cops off UP campuses
PUP accord with DND also faces termination
Joe Biden sworn in as 46th U.S. president, urges end to ‘uncivil war’
MOST READ
A shade at Roque? Vice asserts being a comedian, not a clown
Trump’s parting gifts to Biden: Roaring stocks, a weaker dollar, tons of debt
Graft complaint filed vs Diokno, other BSP execs for P1.75-B contract for IDs
Biden says Trump wrote him ‘very generous letter’
Don't miss out on the latest news and information.