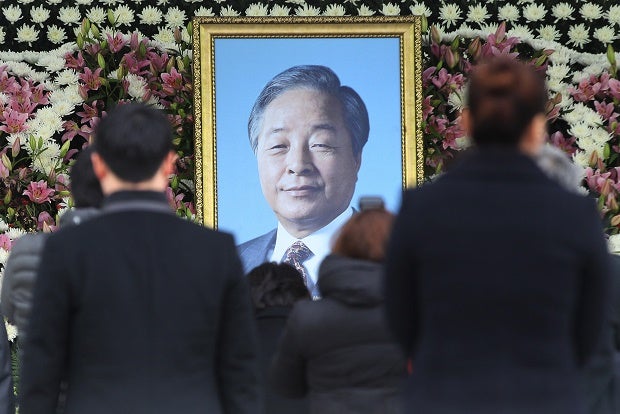 The one-time pro-democracy activist who served as president from 1993-1998, died in hospital on Sunday after a serious blood infection. He was 87.

READ: Former S. Korean president Kim Young-Sam dies at 87
Kim’s term was bookended by two major events, the first nuclear crisis with North Korea in 1994 and the Asian financial crisis of 1997-98, when he accepted a $58-billion bailout from the International Monetary Fund.

He also had the two generals who served as presidents before him indicted and convicted on treason charges, although he pardoned both men at the end of his presidency.

Kim’s funeral casket, draped with the national flag, was carried from Seoul National University Hospital by 11 uniformed bearers shortly after midday (0300 GMT) and placed in a black, stretch hearse—its bonnet decorated with a wreath.

The hearse was then driven through the streets of Seoul in a long funeral cortege headed by a car carrying a large portrait of the former president.

After a ceremony at the National Assembly, Kim was to be buried with full honours at the national cemetery on the south bank of the Han river that runs through the capital.

In contrast to the thousands who lined the roads for the state funeral of the populist president Roh Moo-Hyun who committed suicide in 2009, the turnout on Thursday was negligible—a reflection of public ambivalence over Kim’s legacy.

While in office, Kim launched a popular anti-corruption campaign and had his two predecessors, Chun Doo-Hwan and Roh Tae-Woo, arrested on bribery charges that later morphed into trial for mutiny and treason.

The anti-graft drive was later tarnished after his son was arrested on charges of bribery and tax evasion.

The end of Kim’s presidency was clouded by the Asian financial crisis, still known in South Korea as the IMF crisis because of the massive bail-out negotiated with the world lender.

The terms of the deal were widely seen by South Koreans as a national humiliation and an infringement of the country’s economic sovereignty.

In his farewell address to the nation as president, Kim apologised for a five-year term that had failed to fulfil its initial promise.

“I cannot but frankly admit that my efforts fell short of your expectations,” he said in 1998.

President Park Geun-Hye paid her respects at the hospital morgue on Thursday, but missed the main ceremony due to a heavy cold, a Blue House spokesman said.