Roxas retorts to Poe on transport woes: We did everything we could 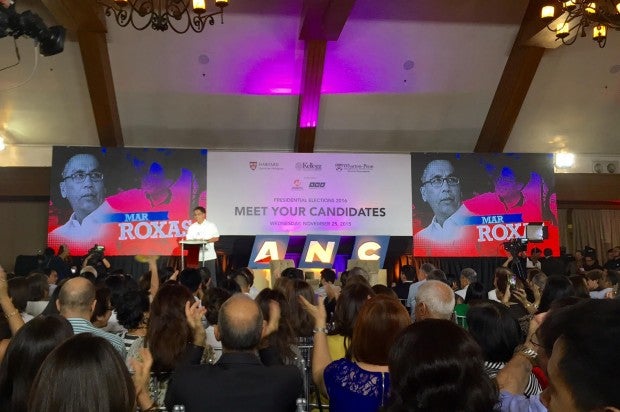 During the days when he was the Transportation and Communication Secretary, Liberal Party (LP) standard-bearer Manuel “Mar” Roxas II is confident that he did everything that he could to address the perennial mass transport problems.

READ: Poe: Roxas could have done more when he was DOTC chief

Such was his response when presidential aspirant Senator Grace Poe said Roxas could have done enough as the head of the Department of Transportation and Communication because “the public deserves better.”

“I’m confident we did all that we could do given what we could do at that time,” said Roxas during a presidential forum on Wednesday night at the upscale Manila Polo Club in Makati City.

The forum dubbed “Meet Your Candidates” was organized by the alumni members of Harvard University, Kellog School of Management and Wharton School of the University of Pennsylvania. It was broadcasted live at the ABS-CBN News Channel.

“That’s not the way things are. You come across a problem, you solve it the best that you can,” he said, drawing claps from the crowd.

The LP standard-bearer explained that the government is doing its best to solve the problem hounding the Metro Rail Transit (MRT) by buying out its contract which he said started as an “original sin.”

Roxas said under the existing contract with MRT, only the current operator could buy new trains.
He said the procurement of new MRT coaches is ongoing and the said coaches will be in the system by the first quarter of 2016. RAM