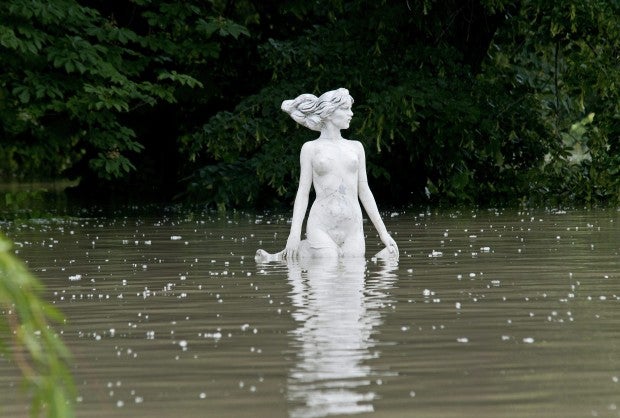 SPITZ, Austria—The Wachau, a picture-postcard river valley in Austria, makes a lot of wine. Soon it could be producing its own electricity too, and in a way that will not spoil the stunning views.

“Wind turbines are out of the question and solar panels are strictly regulated,” says Andreas Nunzer, mayor of picturesque Spitz on the left bank of the Danube river.

“But we have found a way to contribute to the fight against global warming without harming our quality of life.”

It is called river current power.

The idea is to place in the river what looks on the surface like the top of a submarine but is in fact a six-tonne buoy producing enough electricity for 250 people.

Below the waves is a turbine turned by the fast-flowing waters—more brown than the blue of Strauss’s famous waltz—of the Danube, one of Europe’s main waterways.

So far, three prototype river turbines producing between 40 and 80 gigawatts of electricity have been tested in the Wachau, but Nunzer has ambitious plans.

“We have obtained all the necessary permits to have nine of them, and we don’t plan to stop there. We’re just waiting for mass production,” he told AFP.

According to Fritz Mondl, co-president of Aqua Libre, the Austrian firm that has spent the past 10 years developing the technology, this stage should begin next year.

In time, the aim is for all the 30,000 inhabitants of the UNESCO-protected valley, its steep slopes covered in vineyards and dotted with centuries-old castles, to get their power in this way.

Mankind has long harnessed the awesome kinetic energy of rivers, most notably with hydroelectric power, the first plant being built at Niagara Falls in the United States back in 1879.

But even though the technology produces no climate-changing greenhouse gases—which the Paris climate talks aim to reduce—building the vast dams necessary nowadays is politically tricky, particularly in Europe.

“Forty years ago we successfully fought against a hydroelectric dam here,” said Christian Thiery, owner of a Wachau hotel and restaurant at Durnstein, where English king Richard the Lionheart was famously imprisoned in the 12th century.

“Thank goodness we did, because we live off tourism now,” he says. He has already ordered one of Aqua Libre’s buoys to power his 100-bed hotel.

And apart from being unobtrusive, a key selling point of this new technology, its proponents say, is that it is the only source of renewable energy that works 24 hours a day and without the need for heavy infrastructure.

Problems that have long held the technology back, such as clogging of the turbines by plants and debris in the river, have been overcome. Nor do the buoys interfere with shipping or kill fish.

“The global market is forecast to be worth 15 billion euros ($16 billion) in 10 years,” said Jean-Francois Simon, chief executive of French firm HydroQuest, which has installed its water turbines in French Guiana and in Orleans, France.

According to Simon, the relatively small generating capacity of the turbines is a turnoff to big firms, so the sector is dominated by smaller companies like his, Aqua Libre, Smart Hydro of Germany, Canada’s Idenergie and Torcado of The Netherlands.

But it is the small water turbines’ modest size, simplicity and ease of installation that make them attractive, in particular for areas of the developing world that are not connected to any power grid, he believes.

“The water turbines can work in farms of several dozen units and above all can use untapped sources of hydroelectric energy,” he told AFP.

“They aren’t going to turn the energy mix upside down, but they can play their part.”