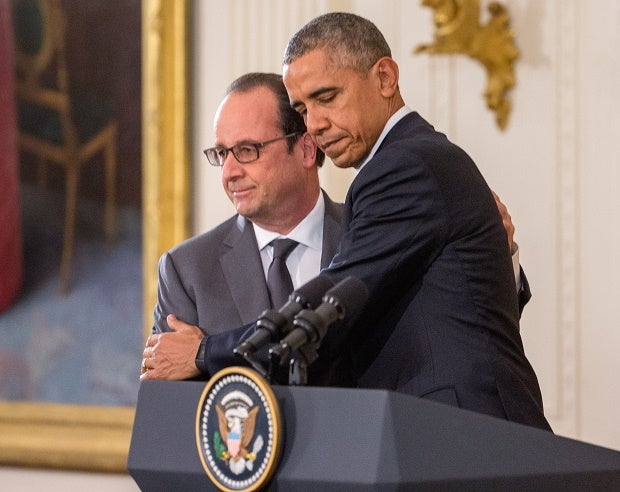 President Barack Obama and French President Francois Hollande embrace during a joint news conference in the East Room of the White House in Washington, Tuesday, Nov. 24, 2015. Hollande’s visit to Washington is part of a diplomatic offensive to get the international community to bolster the campaign against the ISIS militants. AP Photo

WASHINGTON, United States—In a show of Western solidarity, President Barack Obama and French President Francois Hollande vowed Tuesday to escalate airstrikes against the Islamic State of Iraq and the Levant (ISIS) and bolster intelligence sharing following the deadly attacks in Paris. They called on Russia to join the international efforts, but only if Moscow ends its support for Syria’s embattled president.

“Russia is the outlier,” Obama said during a joint White House news conference with Hollande.

Tuesday’s meeting came hours after Turkey shot down a Russian warplane near the Syrian border. The incident underscored the complex military landscape in Syria, where a sprawling cast of countries and rebel groups are engaged on the battlefield and in the skies overhead, sometimes with minimal coordination.

Obama said Russian cooperation in the fight against the ISIS would be “enormously helpful.” But he insisted a partnership is impossible as long as Russia stands by Syrian President Bashar Assad, who is blamed by the U.S. for plunging his country into chaos and creating the vacuum that allowed the ISIS to strengthen.

“We hope that they refocus their attention on what is the most substantial threat, and that they serve as a constructive partner,” Obama said of Russia.

Hollande concurred, saying France wants to work alongside Russia, but only if President Vladimir Putin “fully commits” to supporting a political transition in Syria.

Hollande’s alignment with Obama was notable, given that he was expected to urge the U.S. president to put aside some of his differences with Russia to build a new coalition to fight the extremists. But Hollande’s mission quickly became entangled with the fallout from the downed Russian military plane.

Obama cautioned that information about the incident was still emerging. However, he did say that Turkey had a “right to defend its territory and its airspace.”

Even before the incident between Turkey and Russia, Hollande faced a tough challenge in getting Obama to agree to a partnership with Moscow. The White House is deeply skeptical of Putin’s motivations, given his longstanding support for Assad, and has accused Putin of bombing rebels fighting the Syrian leader instead of targeting the ISIS.

Hollande will meet with Putin Thursday in Russia, part of his diplomatic effort to build support for an intensified campaign against IS. The terror group is blamed for the Nov. 13 attacks in Paris that killed 130 people and wounded hundreds more at restaurants, a concert venue and outside a soccer stadium.

The attacks in the heart of Europe sparked fears of terrorism in the U.S., as well as an outpouring of solidarity with the French. Obama spoke warmly of America’s affection for France, noting that he keeps a photograph by his bed of his wife Michelle and him kissing in the city’s Luxembourg Gardens.

Hollande welcomed the U.S. show of unity, but suggested he was more interested in concrete actions than kind words.

“The Paris attacks generated a lot of emotions,” he said through an interpreter. “But that’s not enough. We must act.”

Obama and Hollande pledged to increase airstrikes against extremist targets, take back ISIS-controlled territory in Iraq and Syria, and focus more on disrupting the terrorists’ financial networks. However, Hollande joined Obama in refusing to intervene militarily on the ground in Iraq and Syria, saying that is a role for local forces.

Shortly after their meeting, a French official in Washington said French warplanes had struck an ISIS command center located west of the Iraqi city of Mosul.

The U.S. has deployed more than 3,000 troops to Iraq to train and assist security forces there. Efforts to train and equip moderate rebel groups in Syria have struggled, and Obama has authorized the deployment of 50 special operations forces to jumpstart the program.

While Obama has repeatedly heralded a coalition of more than 60 countries fighting the ISIS, the U.S. is undertaking the bulk of the direct military action. Obama suggested the Paris attacks had prompted “new openness” among coalition members to step up their involvement, though he did not outline any specific commitments.

The military planning comes amid a parallel diplomatic effort to ease Assad from office. Russia has agreed in principle to a new process that would lead to U.N.-supervised elections within 18 months but continues to oppose efforts to explicitly remove Assad.

Hollande said he wouldn’t set a deadline for Assad leaving office because “it must be as soon as possible.” Obama suggested the solution hinged on Assad “choosing not to run” in the next Syrian elections.

Syria’s civil war, now in its fifth year, has left more than 250,000 people dead and has displaced millions, sparking a refugee crisis in Europe.

The Paris attacks have raised fears in Europe and the U.S. that terrorists might try to sneak into the West as part of the refugee flow. In Washington, the House has passed legislation tightening vetting for refugees from Syria and Iraq, though the White House contends the additional restrictions would effectively block people from those countries from coming to the U.S.

Hollande has said France will press forward with its plans to accept 30,000 Syrian refugees. But he acknowledged Tuesday that there was a need to tighten Europe’s open borders.

“I reject identifying migration and terrorism,” Hollande said. “At the same time, we must control the border.”