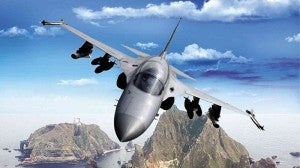 This is the FA-50 fighter trainer jet.  The Philippines has acquired two of this aircraft from South Korea, which will arrive in Manila on Nov. 27, 2015.  This combat aircraft can carry an array of weaponry, such as air-to-air and air-to-surface missiles, and precision-guided bombers, and is equipped with a night vision imaging system. PHOTO FROM WWW.KOREAAERO.COM

MANILA, Philippines — Two FA-50 lead-in fighter trainer jets will be arriving in the country on Friday as part of the Philippine Air Force’s efforts to modernize its aircraft.
The aircraft will land for the first time on Philippine soil at Clark Air Base, officially becoming property of the PAF.

The two jets are the first of the PAF’s 12 newly ordered fighter jets from the Korea Aerospace Industries worth P18.9 billion.

“This is the first time that we will have supersonic capability since 2005 when our jets were decommissioned. This is the revival of the supersonic jet age,” said the Air Force spokesperson, Col. Enrico Canaya.

Defense Secretary Voltaire Gazmin is expected to welcome the arrival of the jets, along with the PAF commanding general, Lt. Gen. Jeffrey Delgado.

The rest of the fighter trainer jets are set to be delivered by 2017 and is said to be the biggest military upgrade so far undertaken by the Armed Forces of the Philippines.

The FA-50 has a top speed of Mach 1.5, or one and a half times the speed of sound. It can be fitted with air-to-air missiles, heat-seeking missiles, and light automatic cannons.

It can carry two pilots in tandem seating while its airframe can withstand 8,000 hours of service. The canopy has ballistic protection against four-pound objects impacting at 400 knots.

Early this year, the PAF sent three of its pilots to South Korea to undergo training in operating the FA-50 fighter trainer jet.

Two Korean pilots will be bringing the jets in from South Korea, after which there will be an acceptance flight. Later on, these will be turned over to the PAF.

Canaya said additional pilots would be trained to use the FA-50 jets in the coming months.

In 2005, the PAF retired its seven remaining Northrop F-5 Tiger jet fighters because of aging airframes and lack of spare parts.

For 40 years, the F-5s used to act as the country’s sole interceptor aircraft, aided briefly by the Mach-2 capable Vought F-8 “Crusader” in the 1980s.  SFM