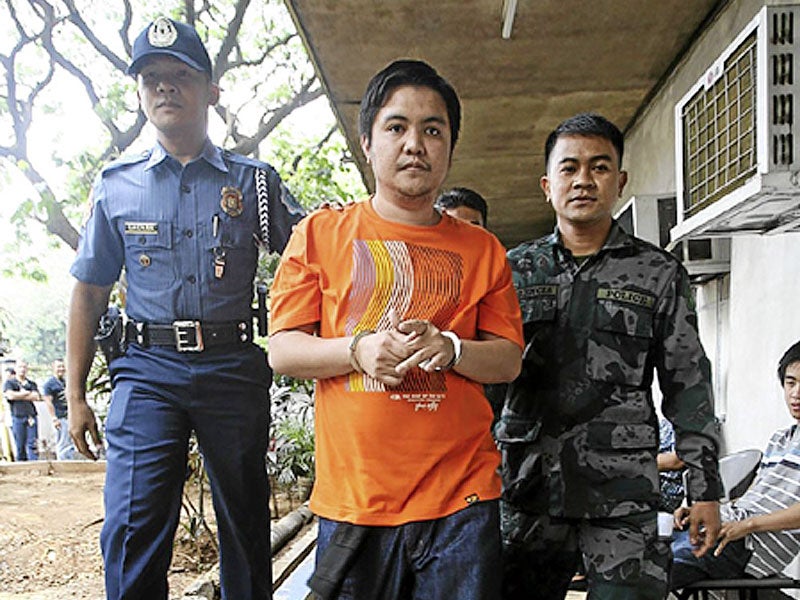 CAMP OLIVAS, Pampanga – The Bulacan police on Monday filed a murder complaint against convicted car theft syndicate leader Raymond Dominguez following the confession of a gunman who tagged him as mastermind in the Nov. 11 murder of a judge in the City of Malolos.

The gunman, Arnel Janoras, however, was shot dead by his police escort after he grabbed the lawman’s gun and grappled with him inside a police vehicle on Monday morning.

The incident happened in Malolos while policemen were taking Janoras, one of two suspects in the murder of Bulacan Regional Trial Court Judge Wilfredo Nieves, to San Jose del Monte City where he was due for inquest for a separate case of illegal possession of firearms.

“There are corroborating evidence against Dominguez in relation to the murder of Judge Nieves,” Senior Supt. Ferdinand Divina, Bulacan police director, said in a media briefing in this regional police camp.

In April 2012, Nieves convicted Dominguez, one of the suspected leaders of a car theft gang operating in Metro Manila and Central Luzon, and sentenced him to up to 30 years in prison. The Court of Appeals affirmed Nieves’ decision in July.

Dominguez is detained in the New Bilibid Prison in Muntinlupa City.

Divina said Janoras, 43, in his extrajudicial confession, admitted he attacked Nieves on orders of “RD,” the initials that he assigned to Dominguez.
Police said Nieves, on Oct. 29, had inhibited himself from four more cases filed against Dominguez.

In his statement to the police, Janoras said he received P20,000 from out of the P100,000 “operational funds” given to the team to ambush Nieves.

Janoras identified one Jay Joson, who went by the alias Jepoy, as the driver of the car they used in the ambush. Joson and a third suspect are at large.

A police statement said Janoras executed an extrajudicial confession in the presence of his lawyer.

Joson, police said, is a regular visitor of Dominguez at the New Bilibid Prison and received instructions from the latter regarding the plot to kill Nieves.

He said the P3.5-million reward for information leading to the arrest of the suspects will go to a police asset.

Lacadin, however, ordered an investigation on the scuffle that killed Janoras to remove doubts of a rubout.

Divina said Janoras sat in the middle of two police escorts at the backseat of a Toyota Innova. The suspect then grabbed the gun of PO2 Michael Perez, who was on his left.

When Perez struggled to retrieve his gun, Janoras fired a shot that hit the vehicle’s window and side mirror. The second and third shots pierced through the chin of the suspect.

Divina said he ordered Perez to stay at the provincial police camp and make himself available for investigation.