Hassled at Naia: Passenger’s 1991 ordeal made fresh by ‘tanim-bala’ 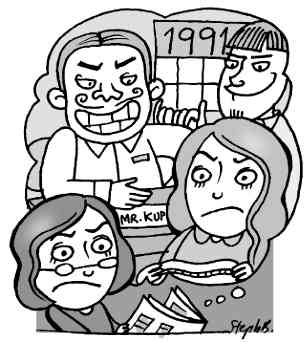 That was almost 25 years ago. But I have been reliving my experience at the Manila international airport everyday just by reading the news. I stood my ground then. These days I am seething with anger. You see, I, too, was detained at the airport.

At the last checkpoint for travel documents, an airport employee summoned me to follow him to an office. He handed me over to a colleague with a desk—and a swagger. I was formally presented to “Mr. Swagger” as someone who had dodged an exit fee.

It may have been a fee that the travel agent should have, but failed to, charge me as part of the exit requirements. I no longer remember the details. The point is the airport personnel got me—for something. Mr. Swagger sat behind his desk which he rocked back and forth on its legs, one arm dangling off the backrest, his head tilted down to the opposite side. “You have violated the regulation so we cannot let you board,” he said.

I explained that my father had just passed away, and the airline had extended bereavement courtesies, waiving the penalty for a modified departure date. I could not explain the omission; I was not aware of any. Mr. Swagger leaned forward and said, “If we let you go, we will lose our job.”

He flipped through my passport and stopped on the page with my entry date. “You’ve been here for over a month. You were on vacation. Nagpasarap ka lang! Tapos kami dito, mawawalan ng trabaho dahil sa ’yo! (You had a great time, while we will lose our job because of you!)”

“My intention was to stay for only two weeks, but my father was hospitalized for a month,” I replied. “You can check and call the hospital.” Mr. Swagger was not budging. I suggested, “You may check the papers. My father’s obits are on the front pages of the dailies.”

“We don’t read newspapers around here,” he said, and repeated: “We will lose our job! What can you do about that?”

“Well,” I started winging it to amuse myself in this farce, “I could go to Blas Ople,” I name-dropped. “He’s an old family friend. He worked in labor.”

Meanwhile, the last call for boarding was being aired. Then, the sidekick came in saying that I was wanted on the phone. I picked up my duffel bag. Mr. Swagger told me to leave it behind. I said, “I’ve been hearing instructions on the PA not to let one’s carry-on out of one’s sight.”

The sidekick offered to carry it but I declined. He gave Mr. Swagger a quizzical look and told him—though more for my benefit—“I tried to be nice. Evidently, she doesn’t trust us.”

The boarding attendant was on the phone urging me to come at once. I told him I was still stuck at the office. I walked back to Mr. Swagger. “So what are you going to do now?” he asked. “I want to call my brother,” I said. “What for?” he asked. “I will ask him to pick me up and drive me to the Times Journal office to see (my former editor) Julie Daza. I was her assistant.”

I was still being outwardly respectful, but deep inside I was fuming.

Then the boarding attendant rushed in. “You have to go!” he said, more nervous than I was about missing the flight. With feigned trepidation and genuine helplessness, Mr. Swagger finally let me go.

We read and hear about the “tanim-bala” (bullet-planting) MO almost every day. We are outraged by the brazenness of the perpetrators. We see passengers “mummifying” their luggage with poly sheets.

If the tanim-bala is eradicated, what guarantees do we have that it will not resurrect in another form?

The author, a mass communications graduate of the University of the Philippines, worked at the World Bank in Washington, DC, for over 20 years before retiring in the Pacific Northwest. She is currently a student of classical painting at Seattle’s Gage Academy.