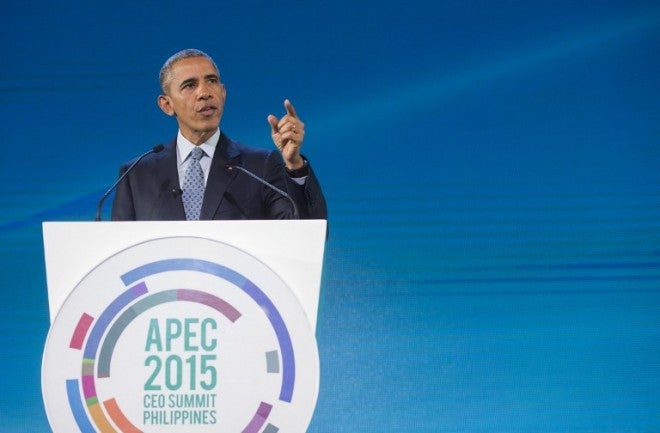 President Barack Obama slammed US “hysteria” about the security risks posed by Syrian refugees Tuesday as Republicans took steps aimed at freezing White House programs to resettle them in the wake of the Paris attacks.

In an unusually fierce rebuke, Obama struck out at his political foes, accusing them of demonizing “widows and orphans.”

The discovery of a Syrian passport near the body of one assailant in the Paris attacks that killed 129 people last Friday has stirred fears among US lawmakers and governors that jihadists are seeking to blend in with refugee masses in order to strike later.

“We are not well served when in response to a terrorist attack we descend into fear and panic,” Obama said.

“We don’t make good decisions if it’s based on hysteria or an exaggeration of risks,” he added, speaking from Manila.

“They are scared of widows and orphans coming into the United States of America.”

His comments came as House Speaker Paul Ryan called for a “pause” in the Syrian resettlement scheme, joining more than half of state governors urging Obama to suspend the program and fully review the vetting process to ensure that would-be attackers do not slip into the country as refugees.

“Our nation has always been welcoming but we cannot let terrorists take advantage of our compassion,” Ryan told reporters.

“This is a moment where it’s better to be safe than to be sorry.”

Some Democrats shared similar views, including senior Sen. Chuck Schumer who acknowledged it might be “necessary” to pause the program amid a review.

Legislation in the works

Republican leaders and House committee chairs appeared to be coalescing around draft legislation that would freeze the program for Syrian as well as Iraqi refugees.

It would require the FBI, Department of Homeland Security and the Director of National Intelligence to concur that each refugee is not a security threat, according to an aide to number two House Republican Kevin McCarthy.

The FBI director also would need to certify that a background check has been done on each refugee before being admitted to the United States.

“We need to ensure that we’re properly vetting these refugees,” said House Republican Richard Hudson, an early architect of the legislation.

McCarthy said he wants a vote on the bill by Thursday.

Should the legislation pass it could be a major roadblock for Obama’s program aimed at taking in up to 10,000 Syrian refugees in fiscal year 2016.

Another bill, by presidential hopeful Senator Ted Cruz, reportedly would ban all Syrian Muslims from resettling in the United States.

After his chamber held a moment of silence for the Paris victims, Senate Majority Leader Mitch McConnell and others said they favored a “moratorium” on Syrian refugees.

He said he was in contact with Ryan and the White House on how to proceed.

Obama, in his remarks, defended the refugee policy, insisting that screening was sufficiently stringent, and would weed out jihadists.

“They are subjected to the most rigorous process conceivable,” he said of the refugees.

The White House held a 90-minute call with a bipartisan group of 34 governors, urging them to avoid measures that would block Middle Eastern refugees from entering the country.

The issue has become a political football in the race for the White House. Several Republican candidates including Donald Trump and Ben Carson have announced their strong opposition to the refugee program.

Trump, in an interview with ABC News’ “20/20” program to air Friday, said he would ban all Syrian refugees—Christians and Muslims—from entering the country.

“The problem is, we don’t (know) if they’re Christian or not,” Trump said in excerpts released by ABC, adding that the screening process needs to be “superior.”

The top Democrat in the race, former secretary of state Hillary Clinton, lashed out at suggestions from Cruz and Jeb Bush that aid be prioritized for Christian refugees over Muslims.

“The idea that we’d turn away refugees because of religion is a new low,” she tweeted.

More than four million Syrians have fled their homeland since the war began.

That slow pace is due largely to the comprehensive screening process that is conducted in refugee camps in Egypt, Jordan and Turkey, which takes 18 to 24 months.

But many of the governors revolting against the refugees expressed security concerns about the very vetting process the State Department and White House assure is so vigorous.

It was not clear what practical effect state-level opposition would have on administration policy.

“This is a federal program carried out under the authority of federal law and refugees arriving in the US are protected by the Constitution and federal law,” a senior administration official said.