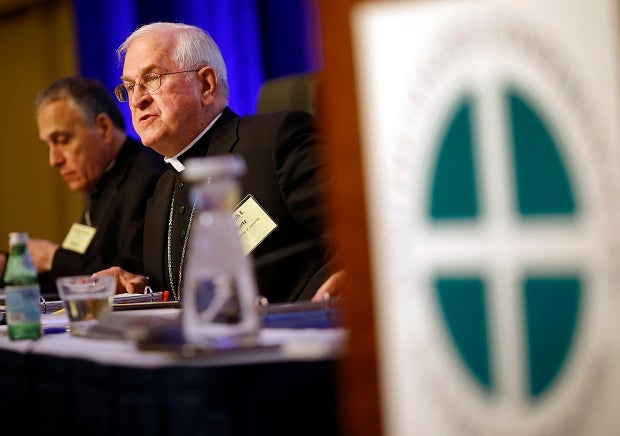 BALTIMORE, United States—U.S. Roman Catholic bishops issued an election-year guide stressing a moral imperative to evaluate candidates according to their position on marriage and abortion. The decision Tuesday followed a brief debate at their national assembly over whether the document reflected the priorities of Pope Francis.

The guide, called “Faithful Citizenship,” addresses a broad range of issues in Catholic social teaching, including protecting immigrants and the environment, fighting racism and poverty, and opposing the death penalty. However, the bishops said they consider opposition to gay marriage and abortion rights paramount in this presidential election season and beyond.

“Some issues involve principles that can never be abandoned such as the fundamental right to life and marriage as the union of one man and one woman,” the bishops said. They said voting for a candidate specifically because the politician favors a “grave evil” such as abortion rights amounts to “formal cooperation” with that evil by the voter.

The document was approved overwhelmingly on a vote of 210-21 with five abstentions.

For decades, the bishops have issued guidance to Catholics ahead of presidential elections. The document is viewed as a barometer of church leaders’ top concerns as they apply Catholic teaching to modern-day policy concerns.

This year’s guidance was especially watched for signs of the influence of Francis, who has upended the priorities of the church in his two years as pope, shifting focus from divisive social issues to protecting the environment and immigrants and helping the poor. The U.S. bishops had decided to slightly revise the document, which was largely written in 2007, instead of drafting a new one.

Bishop Robert McElroy of San Diego, California, said the document was “gravely hobbled” and did not reflect the pope’s agenda. “Global poverty and degradation of the earth” are “at the very center and core” of Francis’ pontificate and Catholic social teaching, McElroy said. “This is not reflected in this document,” the bishop said.

But Archbishop Leonard Blaire of Hartford, Connecticut, who helped draft the document, said “there is a kind of rhetoric of regime change that’s going on in the church, and I think we have to be very wary about that.” He said Francis “certainly has a dynamic and new insight that he’s given to us,” but Blaire said Francis wants bishops to promote “the totality of issues of Catholic teaching,” including opposition to abortion, “holding up what’s right and true and just.”

About one-quarter of U.S. voters are Catholic, but they do not vote as a bloc and it’s not clear what, if any, influence the bishops’ teaching document will have at the ballot box.

“Thousands of laws are being affected by this,” said Cardinal Daniel DiNardo of Galveston-Houston, Texas, who helped draft the guide. “Our intent is to make sure that Catholic citizens understand where we are and what we understand about the sacrament of marriage.”

Separately, the head of the bishops’ migration committee urged public officials to continue providing “safe haven to vulnerable and deserving refugees” from Syria as many U.S. governors, federal lawmakers and others urge a halt on resettlement for now after the Paris attacks. The Islamic State of Iraq and the Levant group claimed responsibility and there were indications that one of the perpetrators might have entered France with a Syrian passport.

“These refugees are fleeing terror themselves—violence like we have witnessed in Paris,” said Auxiliary Bishop Eusebio Elizondo of Seattle, who leads the bishops’ committee. “They are extremely vulnerable families, women, and children who are fleeing for their lives. We cannot and should not blame them for the actions of a terrorist organization.”