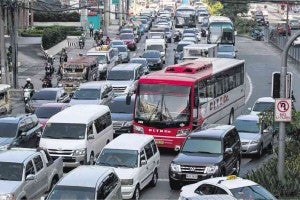 MANILA, Philippines — The metropolises of Manila and Cebu ranked low in terms of liveability against 26 other cities in other Asia-Pacific Economic Cooperation (Apec) member-economies, especially in the areas of connectivity, environmental sustainability, as well as health and welfare.

The PricewaterhouseCoopers study titled “Building Better Cities” survey released on the sidelines of the APEC CEO Summit on Tuesday showed that Manila ranked 22nd, while Cebu was 26th among the 28 APEC cities covered by the report.

With the best performer given the highest score of “28” while the cellar dweller a “1,” Manila was given a score of 15 in culture and social health, 9 in connectivity, 2 in health and welfare, 3 in environmental sustainability, and 7 in economics.

As for Cebu, it received a score of 12 in culture and social health, 2 in connectivity, 3 in health and welfare, 6 in environmental sustainability, and 6 in economics.

According to a PwC statement, the study “focuses on the role urban centers play in the context of APEC’s economic and social growth, and also looks at the cities’ growing influence outside their borders through three lenses: how they fare in basic city development, what differentiates them and the hindrances they face to growth.”

Luz said the competitiveness, liveability and sustainability of cities should be seen as the upmost responsibility of mayors, who he said should “learn from the report.”

However, a check with the metrics used as basis by the report showed that a number of them have been in the ambit of the national government’s responsibility. For instance, in connectivity, broadband quality, mobile broadband, mass transit coverage and airport connectivity are among the areas measured.

In that regard, Luz said the mayor should be the “key drivers,” but admitted that “we should not let the national government off the hook.”

PwC nonetheless noted that “numerous airport projects are in the works to release the pressure valve on some overstretched airports” such as in the Philippines, “which ranked 108 out of 144 economies in quality of air transport infrastructure by The World Bank.”

“Our study ranks Cebu, the Philippines’ second-largest city, low in connectivity, including airport connectivity and access from the airport to the business district center. However, the city plans to add a second terminal to its Mactan-Cebu international airport, nearly tripling capacity to 12.5 million passengers when completed in 2018,” PwC added.

As for Manila, which also ranked low in connectivity “in part due to its low public transport systems ranking,” PwC cited that the city is proposing an $8-billion subway network (the first to be built in the Philippines) dubbed the Mass Transit Loop, as part of a long-term multi-modal transportation build-out.”

“The Philippines Medical Association says that 930,000 doctors are needed to serve their whole country, and yet a good percentage of Filipino doctors are becoming nurses or leaving the country to practice elsewhere,” PwC noted.

As far as environmental sustainability was concerned, Manila joined Ho Chi Minh City in Vietnam and Lima in Peru as among that showed “most room for improvement,” according to PwC.

The report cited the status of Manila and Cebu as fast-rising middle class hubs. For instance, Manila was reportedly adding 670,000 to its middle-class ranks since 2013, PwC said.

“With a population of nearly 13 million (including a large, young, educated, and English-speaking population), it’s [Metro Manila] reaping the rewards of two decades of attracting business process outsourcing (BPO). Beginning with a single call center in 1992, it is now the world’s second largest BPO destination and has employed 900,000 Filipinos in the BPO sector with revenues growing to $15.5 billion from $1.5 billion in the last decade,” it noted.

As for Cebu, it was posting a middle-class growth rate of 6.4 percent since 2013 and was ranked the eighth-largest global BPO destination, PwC added.

For Ayala Corp. chairman and chief executive Jaime Augusto Zobel de Ayala, it doesn’t help that Metro Manila is a “unique case”—composed of several cities and mayors with no overarching framework to unite.

Zobel told the APEC CEO Summit session titled “What will the City of the Future look like?” that local governments should create strong frameworks to develop cities.

“When people think of where to live, work, invest, and visit, they don’t think countries, they think cities. Density and diversity make cities more imaginative, so long as that density and diversity are well-managed. That’s why public-and-public collaboration is needed to keep cities competitive,” Zobel pointed out in a statement.

For visiting Lord Mayor of Melbourne, Robert Doyle, a city should have more open spaces filled with trees so that people would linger in them. “Cities are for people, not for cars; urban designers should put people in mind,” he pointed out.

Doyle added that “if you can’t move around your city, the cost to economy will be prohibitive,” besides its effects on residents’ lives.