Thousands of protesters to march vs Apec–militant group leader 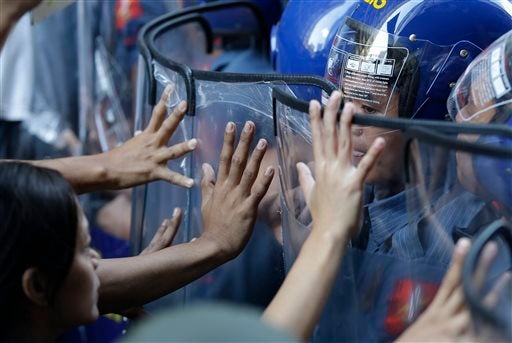 Student protesters clash with police near the US Embassy ahead of the Asia-Pacific Economic Cooperation (APEC) summit in Manila, Philippines Tuesday, Nov. 17, 2015. AP

Thousands are expected to join the protest against the Asia-Pacific Economic Cooperation (Apec) summit as left-wing activists vow to push through with mass actions to denounce the conference, claiming it mires the country in more poverty, debt and underdevelopment.

Despite the government’s imposition of the “no permit-no rally policy” on the week of the high-security event, Reyes said Bayan groups would “fully exercise our constitutionally guaranteed rights and freedoms as we march against the Apec meeting.”

Global activists have also vowed to join the anti-Apec protests in spite of threats of deportation. The government has warned foreigners that they will be facing sanctions for joining local rallies.

Security officials earlier said protesters would not be allowed near the Apec venue and billeting hotels of the delegates.

Reyes also condemned the Aquino administration for hosting the Apec at the expense of “turning Filipinos to second-class citizens in their own country.”

“We condemn the Aquino regime for imposing on the public the heavy burden of hosting the meeting, turning Filipinos to second-class citizens in their own country just so the regime could pander to foreign big business,” he said.

Among the personalities who are attending the AELM are United States President Barack Obama and Chinese President Xi Jinping. Both heads of state arrived in the country on Tuesday.

“We denounce the Obama-Aquino meeting that aims to support the US pivot to Asia, the return of US bases in the Philippines under Enhanced Defense Cooperation Agreement (Edca), and the US imperialist agenda in the region. We denounce Aquino for blindly relying on the false promise of US support in our maritime dispute with China,” said Reyes.

“We call on the Filipino people to speak out against the gross puppetry of the Aquino regime, as seen through Apec and Philippines bilateral relations with the US and other countries … We demand a new framework of development that places national interest and the people’s welfare over private profits,” he added. RC