As world mourns Paris, many in Mideast see double-standard 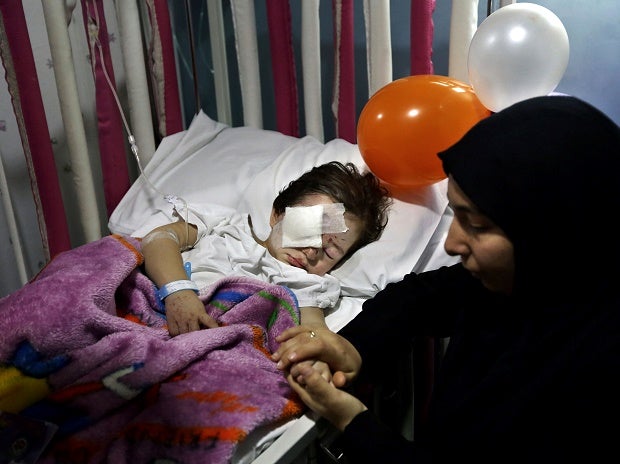 In this Friday, Nov. 13, 2015 file photo, Adraa Taleb holds the hand of her maternal cousin Haidar Mustafa, three, who was wounded in Thursday’s twin suicide bombings, as he sleeps on a bed at the Rasoul Aazam Hospital in Burj al-Barajneh, southern Beirut, Lebanon. Haidar’s parents Hussein and Leila were killed in the blast as they were parking their car when one of two suicide attackers blew himself up in a southern Beirut suburb near their vehicle. Within hours of the Paris attacks last week that left 129 dead, outrage and sympathy flooded social media feeds and filled the airwaves. Commenting on the public outpouring of support and anger following the Paris attacks, Lebanese blogger Joey Ayoub accused the media and world leaders of caring less about deaths in Beirut in IS attacks than deaths in Paris at the hands of the same group. AP FILE PHOTO

BAGHDAD — Within hours of last week’s Paris attacks, as outrage and sympathy flooded his social media feeds and filled the airwaves, Baghdad resident Ali al-Makhzomy updated his Facebook cover photo to read “solidarity” — and his friends were shocked.

“Everyone was like why are you posting about Paris and not about the attacks in Baghdad every day,” the recent law school graduate said. “A lot of my friends said, ‘OK, so you care more about them than you care about us?'”

He had unintentionally tapped into frustration in Iraq, Lebanon and Syria with what many see as a double-standard: The world unites in outrage and sympathy when the Islamic State group kills Westerners, but pays little attention to the near-daily atrocities it carries out in the Middle East.

The day before the Paris attacks, twin suicide bombers struck a southern Beirut suburb, killing at least 43 people, and on Friday a suicide bomber struck a funeral in Iraq, killing at least 21. Both attacks were claimed by the IS group and reported by major media outlets, but generated little interest outside the region, where the turmoil of recent years has made such events seem like a sadly regular occurrence.

Baghdad has seen near-daily attacks in recent years, mainly targeting the security forces and the country’s Shiite majority. Bombings killed an average of more than 90 civilians a month last year, according to Iraq Body Count, a UK-based group that documents civilian deaths in Iraq.

Lebanon, however, had been relatively calm for the past year, leading many to feel that last week’s tragedy was unfairly neglected. Many were angered by Facebook’s deployment of a new feature in the wake of the Paris attacks that allowed users to check in and say they were safe. The feature was not available for the Beirut attacks.

“‘We’ don’t get a safe button on Facebook,” Lebanese blogger Joey Ayoub wrote. “‘We’ don’t get late night statements from the most powerful men and women alive and millions of online users.”

Facebook released a statement saying it had previously only used the Safety Check feature after natural disasters and said it would be used for “other serious and tragic incidents in the future.”

But it added that “during an ongoing crisis, like war or epidemic, Safety Check in its current form is not that useful for people: because there isn’t a clear start or end point and, unfortunately, it’s impossible to know when someone is truly ‘safe.'”

Al-Makhzomy said the feature wouldn’t be quite as useful in Iraq.

“In Baghdad it’s not just like one attack,” he said. “You would need to have a date on the safety check, like I’m safe from this one or that one. … There are too many for just ‘I’m Safe.'”

In the US, social media shaming also played out on Facebook, Twitter and other channels in the aftermath of Paris over the use of a tool that shades profile photos to resemble the French flag. Other social media users object to a sea of vacation selfies at the Eiffel Tower being posted as a show of solidarity and an expression of “slacktivism,” rather than true social justice commitment.

“What happened in Paris is awful and my thoughts are with the families affected as well as our global leaders as they figure out what to do,” said 33-year-old Jim Brown, a former U.S. Marine who lives in Fishers, Indiana. “That said, changing my avatar to the colors of the French flag is just an easy way for me feel like I did something while sitting on my butt in my suburban American home.”

Rosina Motta, 40, grew up near El Monte, California, where one of the Paris victims, 23-year-old Nohemi Gonzalez, lived.

“I wanted to express myself but didn’t want to have to delve into this long Facebook post like other people were doing, so I waited a couple of days and changed by Facebook profile picture using the flag tool,” Motta said.

The reaction from a couple friends was swift, including a fellow woman of color.

“I was questioned by a couple of people why I wasn’t posting about Beirut and Lebanon,” said Motta, who lives in San Bernardino, about 50 miles (80 kilometers) east of Los Angeles.

She was declared a “media sympathizer” for failing to name the local student whose death had moved her and not sharing the student’s photo. The identity had not yet been formally released by officials, Motta said.

“Some comments were race-related and called me out for defending the media when it took time for them to release her name. She is of Latin/Hispanic heritage and it became a ‘brown’ issue,” said Motta, who is of Mexican heritage. “It is beyond ridiculous.”

Kelly Hayes, 34, is an activist of color in Chicago and a community engagement fellow for the progressive nonprofit Truth-out.org. She has received attention online in the aftermath of the Paris attacks for a Nov. 14 post on her year-old blog, Transformativespaces.org, urging an end to the “grief shaming” that is playing out on social media, as it has after other tragedies.

Under the headline, “On the Violence in Paris: Stop the Grief Shaming,” Hayes wrote that the issues of racism, uneven media coverage and the “seeming constancy of some violence” will not be overcome by “judgment or snark” on Facebook, Twitter and other online channels.

“Moments of great empathy are not a social failing. If anything, they are an opportunity to build better and expand our collective compassion. Posts that more or less amount to, ‘if you care about this, but didn’t post about (insert tragedy here), I’m judging you’ help nothing and heal nothing,” Hayes wrote.

For her trouble, she has received about 60,000 views and some backlash of her own. Does she think social media makes it too easy to over-simplify outrage and grief?

“The last thing I would want to do is invalidate the feelings behind people expressing frustration, anger, because those come from a very real place,” said Hayes, who is Native American. “We all express our grief differently.”