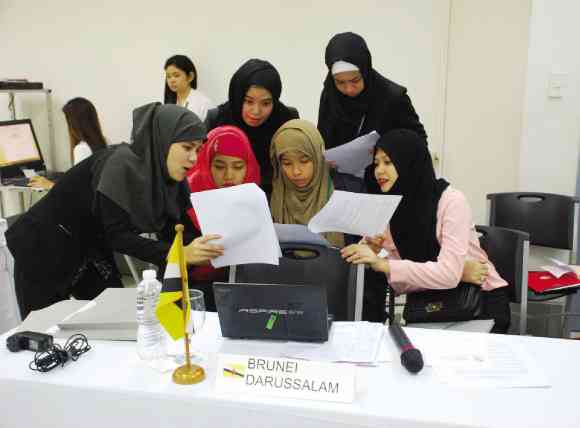 Imagine an Association of Southeast Asian Nations (Asean) where all heads of state are young women.

This was how it was at the first Model Asean for Young Women, a three-day simulation conference of the Asean summit held at Miriam College (MC), with the theme “Opportunities and Challenges toward a People-centered Asean.”

The conference was patterned after the Model United Nations (MUN) or “Mock UN.” Students took on the roles of heads of state and ambassadors and debated issues like economic development, human security, protection of women and children’s rights.

Each school represented an Asean country. Delegates sat on various committees and bodies and produced a draft declaration for the heads of state.

“Miriam College initiated this … to promote women’s leadership. Through this Model Asean, we are highlighting women’s potential for political leadership,” said professor Aurora de Dios, executive director of MC’s Women and Gender Institute, co-organizer along with the MC Department of International Studies, Asean Foundation and the Commission on Higher Education.

There were six topics on the agenda: The protection of the right to freedom of the press, building a culture of disaster preparedness, managing the mobility of skilled labor within the Asean, sustaining the growth of tourism through effective regional branding and creative marketing strategy, antitrafficking of persons, and ensuring the right to nationality of stateless women and children.

De Dios said: “All the topics were relevant to the Asean. They are the very issues in the agenda of the organization.”

Jessamine Raisa P. Rasul, an International Studies (IS) student who was a “member” of the Malaysian delegation for the Asean Commission on Women and Children (ACWC), said they failed to reach a consensus on a resolution, with two members abstaining.

The experience taught them how to negotiate, how to think on their feet and how to deal with frustration, she said.

“It was truly disappointing to see something we built from the ground up fail … but on the last day … every member of ACWC came together again and tried to ensure that our agenda would be put on the table for discussion one last time,” Rasul said.

Niqui Castigador, another IS student, had witnessed proceedings at the MUN of the Far West in San Francisco. She applied what she learned as she took on the role of Asean secretary general.

“I learned … to adapt to different situations and still perform effectively under pressure,” Castigador said.

At the end of the conference, six declarations were finalized. The closing ceremony was capped by the traditional toast by the heads of state.

Tesa de Vela, chair of the MC IS department, said the conference was an avenue for young women to learn by doing. “It taught the young women … the dynamics of Asean diplomatic relations, the meaning of integration and opportunities and challenges to achieving a people-centered Asean.”

Organizers plan to hold the Model Asean annually and will open it not just to schools in the Philippines but in the region.

“We are particularly excited to hold a regional Model Asean in 2016, as it will coincide with the 90th anniversary of Maryknoll/Miriam College. We are also excited to host a regional Model Asean in 2017, which will coincide with the Asean Summit Meeting of heads of state in the Philippines, host of Asean’s 50th anniversary,” De Vela said.

Lawyer Christine Lao is a member of the First Model Asean organizing committee and a faculty member of the Department of International Studies.