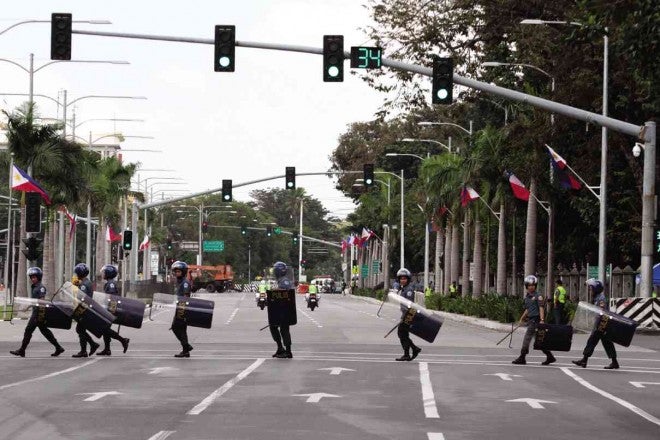 NO-MAN’S LANE Only security forces and Apec-accredited personnel and vehicles can pass through Roxas Boulevard in Manila. The ban started Monday and will be enforced up to Nov. 20. Leo M. Sabangan II

THE MANILA city government’s decision to ban not only motorists but also pedestrians on Roxas Boulevard starting Monday up to Nov. 20, for the duration of the Asia-Pacific Economic Cooperation (Apec) summit, was prompted by the deadly terrorist attacks in Paris last week.

Johnny Yu, chief of Manila’s disaster response office, said the Apec security task force made the recommendation to close down the boulevard on Sunday.

“World leaders are arriving in the country. We have to protect them. It would be a national embarrassment if something bad happens to them,” he told the Inquirer Monday.

With eight lanes of the bayside thoroughfare, from Kalaw to P. Ocampo, placed under heavy guard, Yu said pedestrians could only pass through the service roads.

The no-walk zone will be accessible only to Apec-accredited parties during the international meet.

Manila will also implement other road closures on Wednesday and Thursday for the safety of Apec delegates, particularly the leaders’ spouses, who will be given a tour of the historic Intramuros enclave.

Motorists coming from Jones Bridge are advised to go straight to P. Burgos, then straight to Taft Avenue to point of destination. While those from Muelle del Rio should turn left to Postal Road, left again to Magallanes Drive Extension, then right to P. Burgos.

All vehicles coming from McArthur and Quezon Bridge should pass through P. Burgos to Lagusnilad, then straight to Taft.

Vehicles coming from Pier Zone or R-10 area should turn to Anda Circle.