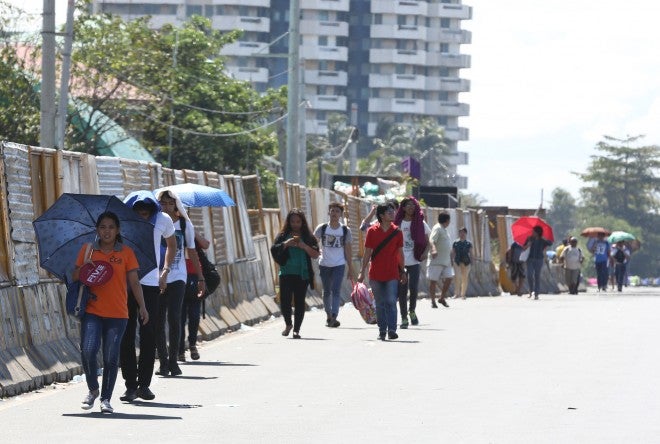 Due to APEC 2015 summit, commuters from Cavite have to walk going to Baclaran, Paranaque City to find passenger vehicles on Monday, November 16, 2015, after authorities closed down a portion of EDSA.
NINO JESUS ORBETA

MANILA, Philippines — Were you also “Apectado” by the problems in mass transportation— or the lack of it— on Monday?

While the government busied itself with road security and providing BMWs for heads of state, some Filipinos affected by road closures travelled on foot. Their journey to reach their destinations landed on social media too with #Apectado.

Facebook was abuzz with similar sentiments. Most of users using the same hashtags wanted to know why there were not enough public utility vehicles and why were roads closed without considering the commuters.

A female user named Lally! even tagged the Metropolitan Manila Development Authority (MMDA) for what she called “a lack of proper rerouting directions for the motorists.”

In Manila, for example, eight lanes of Roxas Boulevard were closed to both pedestrians and motorists starting Monday until November 20. The closure, which was issued only on Sunday, was an effect of the series of attacks in Paris.

In an interview, Yu sympathized with the commuters. He said he also couldn’t understand why the national government implemented the current traffic schemes on Monday, without first suspending classes scheduled for the day.

Yu asked for more patience and understanding. He also advised them to “stay indoors” for the rest of the week.

But if they couldn’t, Facebook user Dreau Lanot has an advice for both male and female commuters: Wear running shoes.

“It’s a good idea for men and women to wear running shoes this week. Ladies, if you’ll go to work in heels, you might wanna bring spare sneakers. No one can tell how much horrors will this week’s rush hour bring and we’ll all likely be forced to revert to the oldest means of transport: feet,” Lanot said.  SFM