Thousands walked 4 kilometers to work, in over an hour, due to APEC road closure | Inquirer News
Close
menu
search

Thousands walked 4 kilometers to work, in over an hour, due to APEC road closure 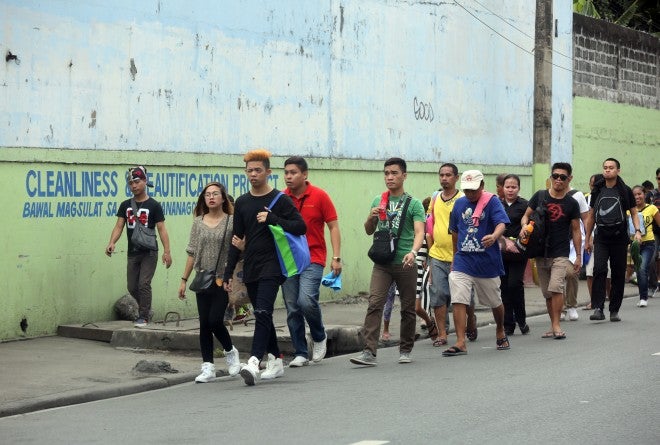 Due to APEC 2015 summit, commuters from Cavite have to walk going to Baclaran, Paranaque City to find passenger vehicles on Monday, November 16, 2015, after authorities closed down a portion of EDSA.  NINO JESUS ORBETA

MANILA, Philippines — It took Makati employee Chisea Ginuguin more than an hour to walk along Roxas Boulevard from Coastal Road in Parañaque City to Heritage Hotel in Pasay City on Monday morning after the closure of the said road for the Asia-Pacific Economic (APEC) Summit left thousands of commuters with no choice but to walk to get to work.

The 21-year-old administrative assistant even took a video of her so-called “sacrifice” in trying get to work on time. In the footage uploaded on her Facebook account, Ginuguin was seen walking along with students and other workers, who already occupied two lanes of Roxas Boulevard.

“I left my residence in Parañaque City early in the morning and I was forced to go down along Coastal Road around 7 a.m. since my work is at 8:30 a.m.,” Ginuguin told the Philippine Daily Inquirer in an interview.

She, however said that she still arrived more than 30 minutes late at her office in Makati City.

Others had to walk double that distance from the Cavitex toll gate until Edsa.

Inquirer production coordinator Jojie Binuya, who traveled from Dasmariñas, Cavite, said he was on the road for five hours.

“I walked for about 30 minutes just to get to the Coastal Mall terminal where I boarded a bus back to Cavite,” added Binuya.

He added that he opted to return home and not go to work because of the traffic situation.

“Buses were supposed to be rerouted to Macapagal Avenue until they reach Edsa,” he explained but noted that some decided to cut trips because of the bumper-to-bumper traffic from Cavitex.

Miro added that the agency met with the bus operators over the weekend and they presented the option to cut trips during the APEC week.

‘We decided that for the whole week, we will be lenient to buses who will cut trips,” added Miro.

Asked if the agency saw the need to provide shuttles for the commuters, Miro said adding vehicles along the road would just cause more traffic.

“The most advisable thing to do is to walk,” added the MMDA Task Force APEC head noting that they also could not open other alternate routes near the Coastal Road area for security reasons.

He, however maintained that more than 800 traffic enforcers have been deployed to help manage traffic during the APEC Summit this week.

Miro advised motorists and commuters from Cavite that they could use Daang Hari, going to South Luzon Expressway (SLEx), then to their destination.

“They can also utilize C5 Road to avoid traffic,” he added.

The MMDA earlier announced that the stretch of Roxas Boulevard from Katigbak to MIA/NIAA Road will be fully closed in both directions starting Monday to Nov. 20 since this will be exclusively used by APEC delegates.

The MMDA recommended the following alternate routes for motorists:

* For public utility buses – From Edsa take a U-Turn before Edsa cor Diokno or take Diosdado Macapagal Blvd. to Baclaran