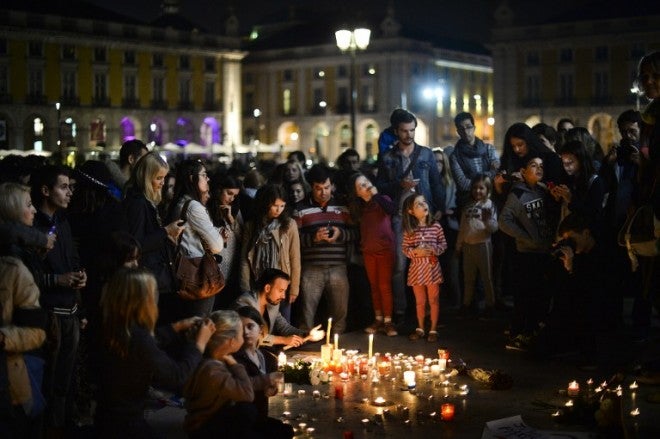 People light candles on Comercio square in Lisbon, on November 14, 2015 during a solidarity gathering for victims and families following a series of terror attacks in the French city of Paris and its surroundings that has left at least 120 people dead and some 200 wounded. A spate of co-ordinated attacks left 128 dead and 200 injured in Paris last night, a day after twin bombings in Beirut left 44 dead, and nearly two weeks after IS claimed it downed a Russian jet leaving Egypt, killing 224 on board. in Madrid on November 14, 2015. AFP PHOTO / PATRICIA DE MELO MOREIRA

THERE is no place for terrorism in a civilized society.

Lingayen-Dagupan Archbishop Socrates Villegas, president of the Catholic Bishops’ Conference of the Philippines (CBCP), made the statement Sunday as he urged the faithful to pray for the victims of the terrorist attacks in Paris, France.

“Pray for Paris. Pray for the victims and their grieving loved ones,” Villegas posted on his Facebook account.

He also asked for prayers “for the terrorists that a new sense of humanity will possess their souls again.”

“Our brothers’ blood is crying from the bloodied soil not for vengeance but for an end to senseless violence. Stop terror! Do not be afraid!” he said.

“There is no place for terrorism in a civilized society. Causing the death of anyone is a sin against God and a crime against humanity,” Villegas added.

Manila Archbishop Luis Antonio Cardinal Tagle on Saturday led thousands of people in prayer for the victims of the Paris attacks.

The cardinal paused for 40 seconds of silent prayer for “the victims of violence” in Paris and other countries in his homily during the closing Mass for the 3rd CBCP Basic Ecclesial Communities National Assembly in Pasay City.

“We cannot isolate ourselves from what is happening in different parts of the world… the constant violence and battles and this morning the news of what happened in Paris,” Tagle was quoted as saying in an article on CBCP News.

“Let us unite ourselves with the many people who are suffering and the victims of violence. We pray for their families and we pray for their countries,” he said. Tina G. Santos