‘Today we are all Parisians’ | Inquirer News
Close
menu
search

‘Today we are all Parisians’ 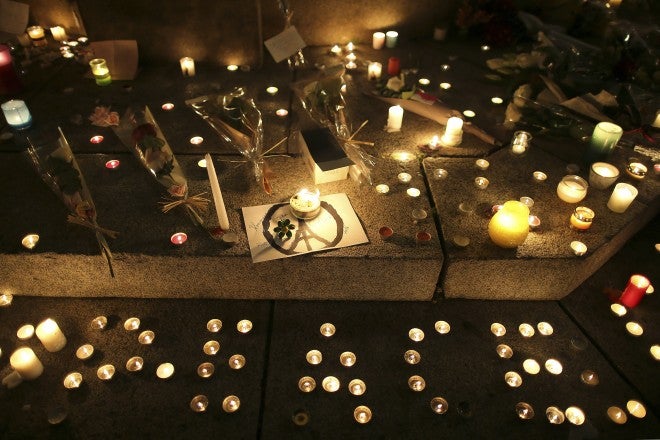 Candles read “peace” at a temporary memorial for the victims of the Paris attacks in Rennes, western France, Saturday, Nov. 14, 2015. French President Francois Hollande vowed to attack the Islamic State group without mercy as the jihadist group claimed responsibility Saturday for orchestrating the deadliest attacks on France since World War II. AP

“Today, we are all Parisians.”

The French Embassy in Manila said this Saturday in response to the “heartfelt expressions of support” for France from the Filipino people, led by President Benigno Aquino III, in condemning the deadly terror attacks in the French capital late Friday.

“We are deeply touched by the heartfelt expressions of support in the Philippines extended by President Benigno S. Aquino III, the national and local authorities, the people of the Philippines, and all those from foreign embassies and groups who have been expressing their sympathy to the French people,” the embassy said.

“France will always fight against extremism and stand for the values of democracy and human rights enshrined in our national motto ‘Liberte, egalite, fraternity,’ which was coined in Paris centuries ago,” it said.

READ: DFA: No Filipinos hurt so far in Paris attacks

‘Sadness and in shock’

Asked if the terrorist attacks would deter Mr. Aquino from attending the climate change conference in Paris next month, Valte said that even before the attacks, the President’s attendance had yet to be confirmed.

“We cannot isolate ourselves from what is happening from the different parts of the world. The constant violence and battles, and this morning, the news of what happened in Paris,” Tagle said at a Mass to mark the end of the three-day Catholic Bishops Conference of the Philippines-Basic Ecclesial Communities National Assembly at Cuneta Astrodome on Saturday.

“Let us unite ourselves to the many people suffering and victims of violence. We pray for their families,” he said.

“As we join the world in mourning and grieving and in sorrow, our gathering is a sign of hope,” he added.

House Speaker Sonny Belmonte said the Paris attacks should be a warning to security officials that the Islamic State problem is global.

Sen. Sonny Angara, on his Twitter account, called for vigilance and joined calls to pray for Paris “because it could have easily been Manila, Tokyo or any other big city.”

“Peace and freedom-loving peoples and governments everywhere should unite to fight this type of terror and indiscriminate violent attacks. This has no place in the modern world. We should all help and create a more peaceful and secure world,”Angara said in a separate text message.

Sen. Ferdinand Marcos described the Paris attacks as “barbaric” and said it was “unacceptable and unforgivable.”

“We stand shoulder to shoulder with the Parisienne and the entire French nation and condemn this terror inflicted upon innocents. We are with them in this fight against terror and extremism in the world,” Marcos said in a statement.

The attacks serve as an unfortunate reminder that no free country and people are safe from terrorism, according to Sen. Gregorio Honasan.

“It is a painful wake-up call that terrorist attacks can happen to anyone, anywhere,” Honasan said in a statement.

On Twitter, Sen. Loren Legarda said she sympathizes with the victims of the “vicious” Paris attacks, and called for vigilance against terrorism.

Sen. Pia Cayetano called for prayers and support for the people of France, while Sen. JV Ejercito said the attacks were “brutal” and “inhuman.”

“In a statement, Vice President Jejomar Binay expressed solidarity with France, while calling on the country’s security agencies to be on their toes and urging the public to be vigilant to deter acts of terror here at home. Reports from Kristine Felisse Mangunay, Gil Cabacungan and Tarra Quismundo

DFA: No Filipinos hurt so far in Paris attacks