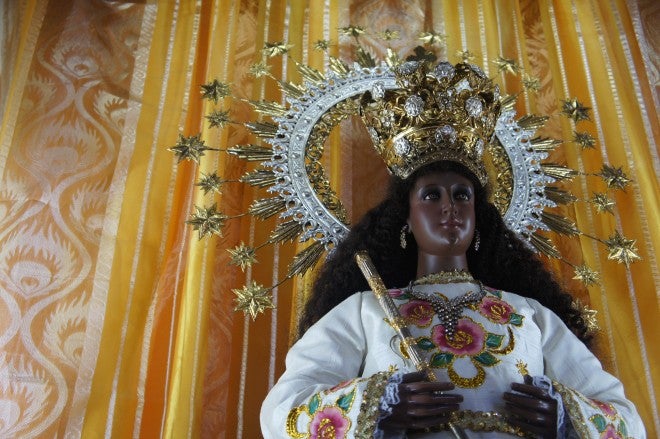 The image of the Reina de Noveleta, also known as “Nanay Paz” PHOTOS BY VAUGHN ALVIAR

Devotees use that expression to illustrate how esteemed the image of the Mother in Noveleta town, Cavite, is to them as they mark the 60th year of its arrival with her crowning as Reina de Noveleta (Queen of Noveleta).

When they invoke the Noveleta patroness, affectionately called Nanay Paz, people will instantly tell the truth about anything, according to devotee Raymond Salazar. “Wala nang magsisinungaling. Aamin na agad. It is out of respect.”

“I grew up in the church,” he notes, referring to the Iglesia Filipina Independiente (Aglipayan church) parish in the town center, where people claim Nanay Paz and the image of the parish patron, the Santa Cruz, have been granting favors to their believers.

“We know the stories, the hopes and wishes, the miracles. I think everyone here grew up respecting Nanay Paz. We respect her, so we do not want to lie whenever she is mentioned.”

Nanay Paz, taken from Nuestra Señora de la Paz y Buenviaje, was brought to the Aglipayan Church by a faith healer, which the elders referred to as Nanay—or Santa—Teresa, on Nov. 13, 1955.

According to sources in the parish, the image is inspired by the 17-century wooden image at the Antipolo cathedral, brought to the Philippines from Mexico through the galleon trade and now attracting droves also because of her miracles.

The faith healer, they say, converted from Islam. On one of her pilgrimages to Antipolo, the Mother told her to make a replica and send it to a church in Noveleta near a crossroads. An emissary located the IFI, talked to the priest and the council, and soon enough the image was on its way. 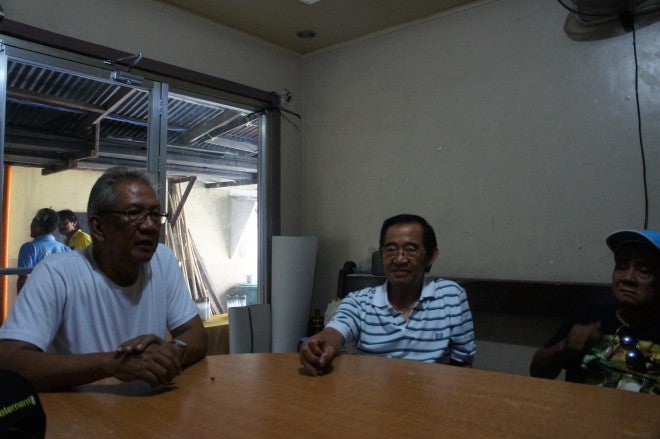 Some of the sacristans who joined the 1955 welcoming festivities for an image that is now the patroness of Noveleta town. In the middle is Eddie Ola.

“I was a sacristan here,” says Eddie Ola, who was 12 in 1955. He can hardly remember some details of the early years of of Nanay Paz in this Cavite town, but can still vividly recall how the townsfolk received the image that Sunday.

“We welcomed Nanay Paz, Nanay Teresa and about three to four jeepneys of the faith healer’s followers at the boundary of Noveleta. We had a procession to the church and then a Mass. There were over 300 of us from Noveleta,” he says. He and other sacristans held the ciriales and processional candles.

They were waiting at the boundary around lunchtime, he says. The convoy reached the town in the afternoon, and Mass was held around 4 p.m.

The image, with a body made of wood and the pedestal made of concrete, easily gained devotees, with Nanay Teresa holding weekly healing sessions after the Mass, he recalls.

Since then, devotees note, the image has shown its might.

There was a time when the image and the Holy Cross fell from their places in the altar, but the two were unscathed, except for a damaged finger for Nanay Paz. Devotees also observed that there was a certain direction processions had to take to make sure it wouldn’t rain—and on occasions where it rained, it would either stop or the raindrops would avoid the image.

“The image is also growing, according to elders,” says Salazar. He agrees, noting that her old clothes already do not fit although the image is not bathed and the clothes not washed.

He also notes that the image has a mood—during processions, for example, sometimes one person can carry Nanay Paz and yet on others, it would take 10 people. 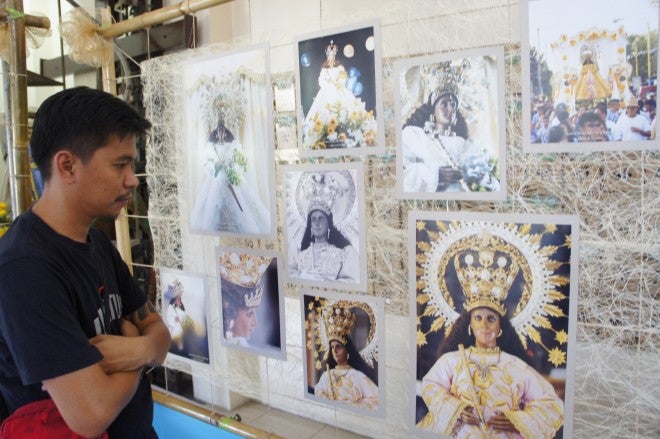 Paeng Balen examines some of the shots displayed during the photo exhibit, mostly by him. The shots were taken during celebrations from 2011 to present. The exhibit was unveiled after Mass on Oct. 26.

Her face also changes, notes devotee and professional photographer Paeng Balen, who with two others mounted an exhibit titled “Mga Mukha ni Nanay Paz,” using photos from different processions beginning 2011. It was unveiled on Oct. 26 and auctioned off Oct. 30.

“She’s a beautiful subject,” he says, admitting he now has thousands of frames of Nanay Paz.

Salazar says one of her most resounding display of power was her 50th year in Noveleta, when those who brought her suddenly paid her a visit, from Nueva Ecija, Bulacan and even Hawaii. “They say she appeared to them in a dream, and they did not even know it was her 50th anniversary in Noveleta.”

Blessings poured in since 1955, the devotees note.

“Malaki rin ang naitulong niya sa akin,” says Ola, who was able to enter the US Navy after service to the IFI church from a young age all through high school and college. He was able to bring his family—even his extended family—to the United States.

Most of Nanay Paz’s interventions are for travel, he notes. His fellow sacristans back in the day were able to resettle or work abroad. Meanwhile, Balen now regularly travels to Singapore and across Cavite, with his group of photographers and videographers Clover Leaf Production getting hired to shoot events.

Salazar says Nanay Paz helped a couple who’ve been wanting to get pregnant for eight years and have also visited Obando, Bulacan. “I just placed their prayer request with Nanay Paz and their prayer was granted.”

The many whose wishes were granted express thanks in varied ways.

Some prefer to donate clothes and accessories for Nanay Paz, such that there is no shortage of costumes even if she changes her clothes weekly and even more frequently on her feast day in May, and the months of November and December.

“People have to schedule when they want to dress Nanay,” said Salazar. 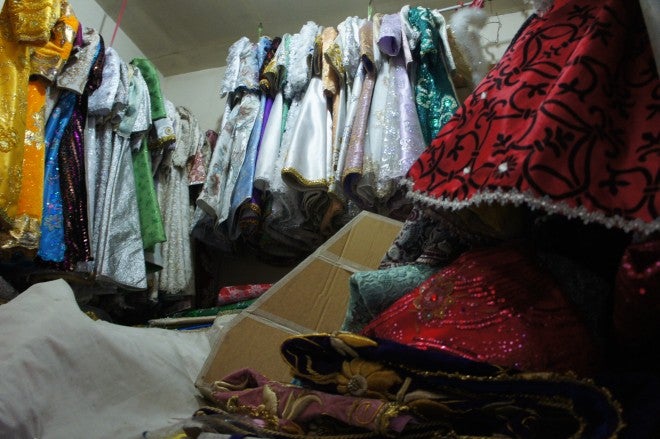 Some of the clothes that are stored by the IFI. More are with some devotees.

She has so many accessories and clothes now that aside from the church’s own storage room, residents are keeping some.

When she is brought out during karakol, people swarm her, he adds. “Devotees increase every year. That prompted us to change the schedule of the procession from 7:30 a.m. to 5:30 p.m. to 6 p.m.”

For Patrick Palustre, who composed the theme song for the 60th anniversary, the thanksgiving comes in song. In fact, he and other composers of the IFI in Noveleta mounted on Nov. 3 “Mga Himig at Awitin Alay kay Nanay Paz.”

Many of those who’ve immigrated make it a point to go home to Noveleta yearly, especially in May. Among them is Ola, now residing in Chicago. “Hindi ako maaaring makalimot. Hindi maaaring hindi ako uuwi yearly,” he says.

Salazar notes that faith in God has only grown stronger over the 60 years that Nanay Paz has been in Noveleta.

The faith is not only for Aglipayans in Noveleta, as the image also visits IFI parishes in Cavite City and even in Malabon, where the IFI houses another miraculous image of Mary.

But, devotion is also for Roman Catholics and other sects, because they also attend services for Nanay Paz, Salazar says. For the Marian procession they hosted on Friday, Roman Catholic churches participated, and thousands, not just members of the IFI, went out to the streets to see the festivities.

“It should always come from the people,” Ola says. “It’s in their faith, their belief in the Lord.”