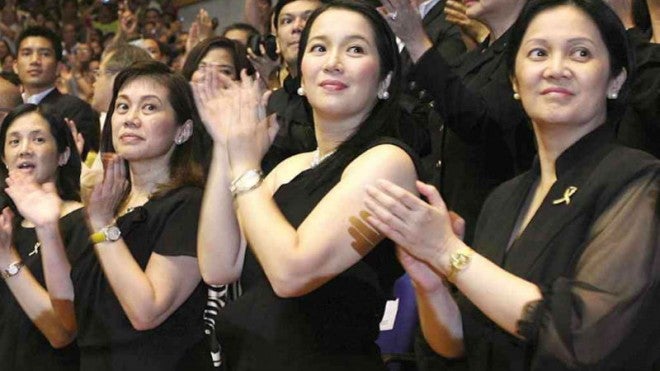 Intramuros in Manila will become a virtual time machine next week when President Aquino’s four sisters offer the spouses of several heads of state a glimpse of life in the Philippines during the Spanish era.

“We envision a leisurely Saturday with the family relaxing,” said Nes Jardin, who leads the creative team behind the cultural events related to the Asia-Pacific Economic Cooperation (Apec) Leaders’ Meeting, in an exclusive interview with Inquirer Lifestyle.

“There will be children playing sungka (a native game played with a long board and cowrie shells) and a young woman singing in a tertulia (a social gathering), while other family members gather around to listen,” Jardin added.

“There will also be  househelp making pastillas (milk candies) in the kitchen, while another helper cuts out candy wrappers bearing the names of the guests.  These will be offered as gifts,” the head of the creative team said.

Tradition dictates that the spouse of the head of the host-state tour the spouses of guest-leaders during Apec events, but with President Aquino being a bachelor, his sisters had to fill in.

Jardin said the tour, with the theme “A Walk Through Time,” would recreate a “living museum” scenario at every stop featuring actors, dancers and musicians.

The tour of Intramuros, he added, will give the spouses a glimpse of the country’s cultural heritage from the Spanish colonial period.

“The whole event will have a fiesta atmosphere,” Jardin said.  “Upon arrival, the guests will be treated to singing and dancing through a number called ‘Jota Intramureña.’”

The tour also includes a photo exhibit and a serenade by a boys’ choir, and ends with shopping in a curated bazaar where Jardin said the visitors  “can shop for Philippine-made products and have lunch while listening to some of the country’s leading singers.”

Senior officials and other delegates to the Apec meeting will be feted at a separate but just as memorable cultural presentation on two occasions, including a welcome dinner with the theme “Contemporary Manila” that showcases modern and hip aspects of city life.

Guests will also be treated to updated arrangements of popular songs that became hits during their youth.

Jardin said the setting for the show will feature urban street art while the catered dinner will showcase fusion dishes by the LJC Group and Bono Gelato.

Another dinner will have the theme “archipelago of sounds,” to be directed by noted filmmaker Loy Arcenas.

Sources privy to the “Contemporary Manila” event to be held in Pasay City tonight gave Inquirer a copy of the approved menu.

Pearl of the Orient theme

Spaghetti and tagliolini pasta can be topped with napolitana (tomato and basil) or puttanesca (tomato, capers, olives and anchovy) sauce. Roast US black angus rib eye will also be available at the carving station.

Tonight’s separate sit-down menu will have a “Pearl of the Orient” theme, and will include king prawn and forest fern with salted eggs for appetizer and a choice between broccoli and pumpkin soup.

For the mains, there will be lamb cutlets in native garlic and lamb sauce, tuna belly with mango and grain mustard sauce, fine beans and baked tomato, and bamboo rice with forest mushrooms.

Both buffet and sit-down dinner will have identical desserts.