Santiago wants to prohibit use of public funds for ‘propaganda’ 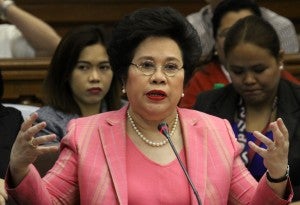 Senator Miriam Defensor-Santiago wants a government official or employee who uses public funds for “propaganda” without legislative consent to be suspended or removed from office or end up in jail for at least five years.

Santiago’s proposal was contained in Senate Bill 2997 that seeks to prohibit the use of government funds for propaganda purposes.

“It is a misguided policy for the state to engage in costly propaganda at the expense of the taxpayer in times when the nation’s socio-economic recovery is the top priority,” she said in the explanatory note of the bill.

“Politicians use and abuse publicity and the media to associate him or herself with government projects for political leverage and personal aggrandizement. Since public funds are involved, government propaganda is an easy target for graft and corruption.”

“There is therefore, a need for legislation to closely monitor government-funded publicity and propaganda. This bill seeks to address this need by prohibiting the use of public funds for government propaganda without legislative consent, and providing penal sanctions for violators,” the senator added.

The bill defined the following as “propaganda.”

* Any message designed to aid a political party or candidate;

* Any message with the purpose of self-aggrandizement or puffery of the administration, agency, executive branch programs or policies, or pending congressional legislation;

* A news release or other publication that does not clearly identify the government agency directly or indirectly (through a contractor) financially responsible for the message;

* Any audio or visual presentation that does not continuously and clearly identify the government agency directly or indirectly financially responsible for the message;

* An internet message that does not continuously and clearly identify the government agency directly or indirectly financially responsible for the message;

* A message of nature tending to emphasize the importance of the agency or its activities;

* A message that is so misleading or inaccurate that it constitutes propaganda; and

* The preparation, distribution, or use of any kit, pamphlet, booklet, publication, radio, television, or video presentation designed to support or defeat legislation pending before Congress, except in presentation to Congress.

A government official who would violate the proposed measure would be subject to either administrative discipline including, when circumstances warrant, suspension from duty without pay or removal from office or a fine of up to P500,000 or they could face imprisonment for at least five years. RAM