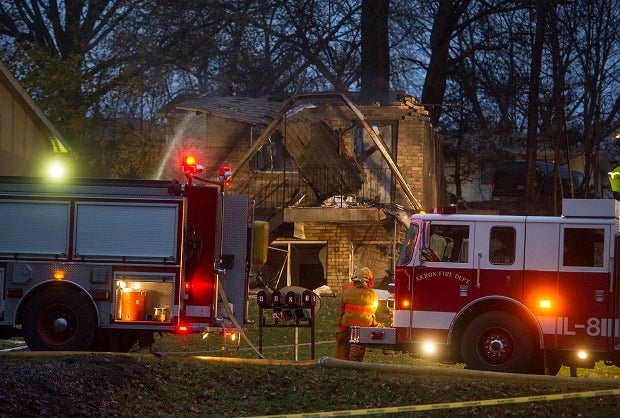 Firefighters work at the scene where authorities say a small business jet crashed into an apartment building in Akron, Ohio, Tuesday, Nov. 10, 2015. Investigators were trying to determine how many people were on the 10-seater jet, but they confirmed two deaths, said Lt. Sierjie Lash, an Akron fire department spokeswoman. AP

AKRON, Ohio — Seven associates of a Florida real estate investment company were on the second day of a multicity Midwestern trip to look at property for potential shopping centers when their small jet crashed into an Ohio apartment house, killing all nine people onboard.

The crash Tuesday afternoon in Akron — 2 miles (3 kilometers) from the small airport where the plane was to land — killed two executives and five employees at Pebb Enterprises, a Boca Raton-based company that specializes in shopping centers. The two pilots also were killed.

“Our hearts are broken this morning with the news of the tragic accident that took the lives of two principals and five employees of Pebb Enterprises,” said a statement posted Wednesday on the company website.

READ: Up to 9 feared dead in US plane crash—report

Officials haven’t released names of the victims, but family members at the crash scene said the dead included 50-year-old Diane Smoot, who was with the group from Pebb Enterprises, her sister told Cleveland.com.

The National Transportation Safety Board recovered the cockpit voice recorder, which was being sent to a lab in Washington.

Investigators also reviewed surveillance video from a construction company that showed the plane coming in along the tops of trees and banking to the left before it crashed and exploded into flames and a cloud of black smoke, said Bella Dinh-Zarr, vice chairman of the NTSB.

The left wing hit the ground first before the plane crashed into the apartment house, she said.

A pilot who had just landed at a nearby airport reported hearing no distress calls despite being on the same communications frequency as the aircraft that went down, the NTSB said.

The plane departed from Cincinnati on Tuesday morning and stopped in Dayton before crashing on its approach to Akron Fulton International just before 3 p.m.

The 10-seat Hawker H25 business jet clipped utility wires and crashed into the four-unit apartment building, sparking a fire that destroyed the building, Ohio State Highway Patrol Lt. Bill Haymaker said. Nobody was home at any of the apartments, and there were no other injuries.