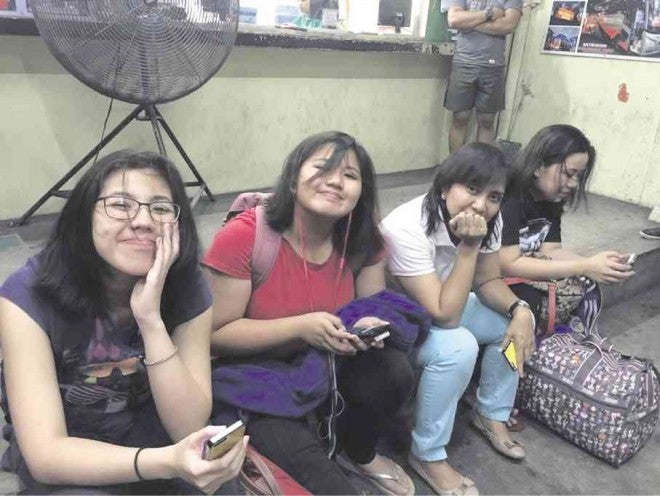 CAMARINES SUR Rep. Leni Robredo and her daughters wait for a bus ride to Naga City in this photo taken by Kaye Lawrence Luz and posted on her Facebook account.

On her Facebook post on Oct. 30, Camarines Sur Rep. Leni Robredo looked like she was enjoying sitting by the sidewalk with her three daughters while waiting at a bus terminal for their ride going to Naga City for the observance of All Saints’ Day.

A viral post several months ago also showed her waiting by the roadside somewhere in Metro Manila for the bus she will be taking for a trip going home to Naga one weekend. It has been her routine since she was elected representative of the third district of Camarines Sur province in 2013.

Robredo says she had to be in Naga every weekend to visit government projects and consult her constituents, from one barangay to another, in her congressional district of 186 barangays, and to attend functions and meetings with local leaders, civil society groups and religious leaders.

From Manila, she takes the bus to Naga on Friday night. She leaves Naga, also by bus, to Manila on Sunday.

Nowadays, Robredo’s schedule has become more hectic with the elections getting nearer and being the running mate of the Liberal Party’s presidential candidate Mar Roxas. But she still prefers the bus ride to Naga and back to Metro Manila.

“First, I find bus travel more reliable and efficient than a plane ride to Naga City because I have no time wasted,” she says. “I can rest and sleep through the ride which takes about eight hours from Quezon City where I live with my three daughters.”

Robredo says traveling by bus is definitely economical. “It’s more than P1,000 for the most expensive fare, while the plane fare to Naga from Manila is more than P3,000 for a one-way ticket.”

For the two-day weekend schedule to touch base with her constituents, the lawmaker says she visits from 20 to 30 barangays.

“I arrive in Naga early morning and immediately I start working, going around the district,” she says. “If you take the plane from Manila, half of the day is spent traveling from our house in Quezon City to the airport, then from the airport in Naga, then to my house.”

Robredo has taken the plane ride only a few times. Her husband, then Interior Secretary Jesse Robredo, died in a plane crash in Masbate in August 2012.

There are three flights a day to Naga—two in the morning and one in the afternoon.

“It’s true that the actual plane travel is short, but the total delay in travel time is not commensurate to the setbacks in schedules,” she says. Moreover, she adds, “the flights going to Naga are not very reliable.”

Will she still take the bus to her hometown in case she is elected Vice President?

“Oo naman (Of course). Why not?” Robredo told reporters during a visit in Dagupan City on Wednesday.

Taking the bus, having no security detail, and driving her own car are her ways of maintaining her core values. “It is important for me to see myself on the same level with the ordinary people. Once I see myself higher than them, that will be my downfall,” she said.

If there is something that has changed in her life now that she is a vice presidential candidate, Robredo said it’s just that she is busier.

During her trip to Pangasinan on Wednesday, however, she arrived on a helicopter with Rep. Leopoldo Bataoil, who invited her to the province. She hopped from two engagements in Dagupan and to a multisectoral forum in Lingayen town and returned to Metro Manila to attend the regular session at the House of Representatives.

If there will be changes in the future, Robredo wanted them to be kept to a minimum, such as having somebody to accompany her during her bus rides.

She said her candidacy for a national position reminded her when she first ran for representative in 2013. “Again, many people are helping me now because of my husband. Again, the challenge is how to prove that I am not just a widow but I also have something to offer to the constituency,” she said.