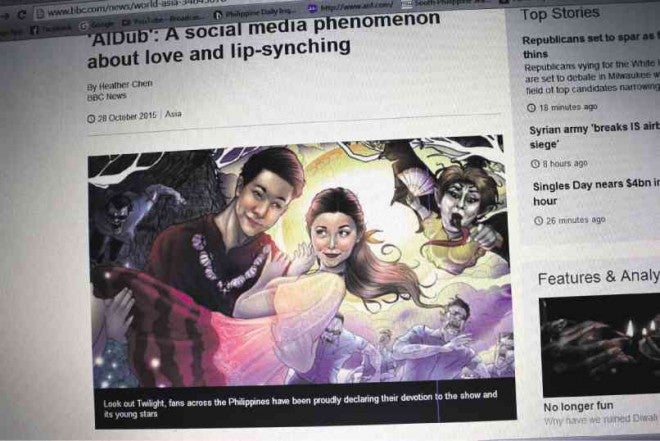 Karlo Patricio Rodriguez who? Very few people knew that the AlDub viral artwork that appeared on Facebook, Twitter, Cable News Network (CNN) and British Broadcasting Corp. (BBC) was created in August by Rodriguez, an information technology graduate who hails from this capital town of Camarines Sur.

Rodriguez, 27, a graduate of Camarines Sur Polytechnic Colleges in 2011, was surprised when he saw that his creation was used by BBC in its website on an article written by Heather Chen titled “‘Aldub’: A social media phenomenon about love and lip-synching.”

The artwork, “AlDub and the Manananggal Gang,” was attached to the trending topic in Twitter with the hashtag #ALDUBOnCNNPH, he said.

It neither illustrates nor mimics what has been in the so-called kalyeserye (street series) segment of the 36-year-old noontime show “Eat Bulaga” at GMA 7 that built the love team of actor-television host Alden Richards and social media star Maine Mendoza, who earned fame by doing Dubsmash on YouTube.

Rodriguez said he made the artwork to help a friend at Ateneo de Naga University for a project in Psychology with a pop culture subject. He said he chose the manananggal (vampire-like mythical creature), one of the country’s most common pop culture icons; an assembly of zombies; and media sensations Richards and Mendoza, aka “Yaya Dub,” along with Lola Nidora (Wally Bayona).

To put his stamp on his artwork, Rodriguez watermarked it with OLRAK, the inverted sequence of his first name. He finished it in three days time and started sharing it to his friends on Facebook on Aug. 30.

“Sometime in October, we were watching the CNN and saw my work because of the AlDub trending topic. I was happy but it was unexpected because I have no intention to really share it to the public but only to my social media and artist friends,” he narrated.

While the original work was watermarked, the one used by BBC was cropped, leaving out the stamp he placed on the right bottom corner. “Maybe they have their standard size of photos used in their articles, that’s why they cropped it,” Rodriguez enthused.

He has been a long time fan of “Eat Bulaga,” saying the show relieves him of stress. That was why when he was deciding on what subject to use for the artwork on pop culture, he immediately chose AlDub, which was then just starting to get popular in August.

Nevertheless, Rodriguez said he was grateful to the “AlDub Nation,” the fan base of the Richards-Mendoza tandem, since he figured out that his artwork would not get the attention of international networks without them using it.

Carla Alhambra, 31, and Sarah Faye Delgado, 29—two of Rodriguez’s friends—said they were happy with the attention his artwork has been generating. 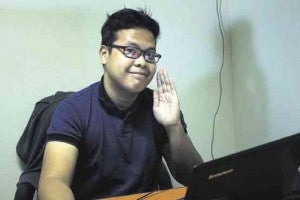 Alhambra recalled that Rodriguez showed to her his work and asked for her impression of it before it was posted on Facebook.

Delgado said she saw Rodriguez working on the art piece, but she just did not pay attention to it because it was just one of those he doodled on. “I did not know he posted it on Facebook. When it became viral, I told myself it looked like Karlo’s drawing,” she recalls.

But she got sad that credit had not been given to where it was due.

Now, Delgado has begun sharing the “AlDub and Manananggal Gang” photo with Rodriguez’s watermark so that netizens will know the person behind its creation.