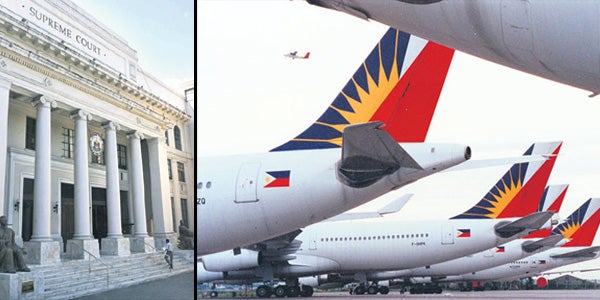 BIG LIFT Wracked by labor turbulence, the Philippine Airlines gets a big lift from the Supreme Court which recalled an earlier decision ordering the reinstatement of 1,400 PAL flight attendants because a wrong division issued the ruling. INQUIRER FILE PHOTOS

In an unprecedented move denounced as a “travesty of justice,” the Supreme Court has recalled its “final” decision ordering the reinstatement of 1,400 Philippine Airlines (PAL) flight attendants purportedly because a wrong division issued the ruling.

In a two-page resolution dated October 4, the court en banc decided to handle the case after PAL lawyer Estelito Mendoza wrote the tribunal and questioned its Second Division ruling ordering the reinstatement of the members of the Flight Attendants and Stewards Association of the Philippines (Fasap).

“Pursuant to the … internal rules of the Supreme Court, the court en banc resolves to accept (the case) and to take cognizance thereof. The court en banc further resolves to recall the resolution dated Sept. 7, 2011, issued by the Second Division in this case,” the tribunal said.

Fasap president Bob Anduiza said it was “mind-boggling and deeply disturbing” how a mere letter from Mendoza had prompted the court to recall what it had declared as a decision reached “with finality” and that “no further plea shall be entertained.”

“The Filipino public should stand witness to this travesty of justice. The law is being mocked in this case. It sends a very shocking and shameful message to the world that in our country, workers do not stand a chance against the rich and influential businessmen,” Anduiza said. “This is really very, very dangerous.”

Court spokesperson Midas Marquez said the court en banc had to recall the order because the Second Division erred in ruling on the case when it was supposed to have been handled by the tribunal’s Special Third Division.

“Apparently, there is a misapplication of the rules on which division should resolve that issue and therefore the court en banc decided to accept the case,” Marquez said.

When asked why a mere letter, and not a formal pleading, from the PAL counsel was filed and was able to move the high court, Marquez said: “Perhaps, they were also in a quandary as to which division to address the case.”

“This is the first time  I’ve encountered something like this and it was brought about by the series of retirements. It’s a technicality but this is a very important case so we want to remove all doubts,” he said.

Fasap pointed out that the high tribunal had said three times that “PAL’s retrenchment was illegal” and its dismissed members fighting a legal battle for the last 13 years were “entitled to full back wages and reinstatement.”

“Did the ‘honorable’ men and women in robes take in consideration the welfare of the PAL employees? Or did they weigh in favor of the interest of the big and rich businessmen?  We cannot help but describe this as a naked power play, where the victims are again the lowly workers. It is decisions like this that tarnish the image of the Supreme Court and the country,” Anduiza said in a statement.

“Imagine, by a mere letter from Attorney Mendoza, the Supreme Court recalled three previous decisions! Where else can the workers seek for justice!” he said.

Marquez explained in a press briefing how the case ended up erroneously in the Second Division.

Under the court’s internal rules, further motions or “incidental matters” raised about the case should have been resolved by the  Special Third Division since the ponente (author) of the initial ruling had retired, Marquez said.

He also noted that three other members of the five-member Third Division that issued the ruling Santiago authored had also been replaced.

“Look at the original composition that decided this case, only one of them remains and that is Justice (Teresita Jose Leonardo) de Castro. All four retired already therefore all these four members have been replaced by designated members of the Special Third Division,” Marquez said.

Ruling not yet final

“And therefore, he submitted his draft and members of the Second Division concurred with him,” Marquez added.

Marquez also said that the Second Division ruling had not yet attained finality because there was still no entry of judgment in the case.

“To avoid any further confusion and to erase all doubts, the en banc decided to accept this case,” Marquez said.