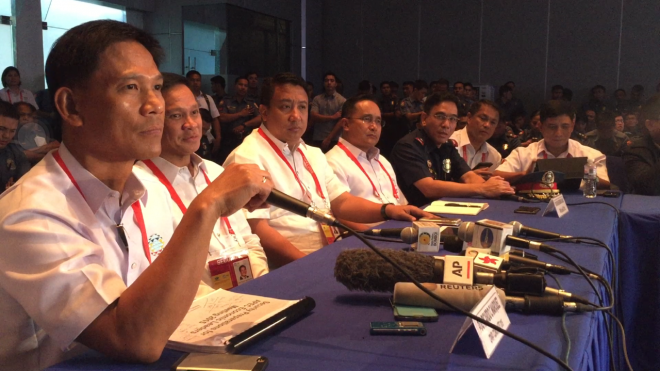 PNP chief Director General Ricardo Marquez is the APEC 2015 task force commander. Marquez and Interior Secretary Mel Sarmiento led the briefing on the launch of the Multi-Agency Coordinating Center for the APEC summit on Nov. 17 to 19. JULLIANE LOVE DE JESUS/INQUIRER.net

The Multi-Agency Coordination Center (MACC) that will serve as the command center of 18 agencies under the committee on security, peace and order and emergency-preparedness for the Asia Pacific Economic Cooperation (Apec) summit was opened to the media on Wednesday.

The command center for Apec security will be at the One Esplanade events place along Seaside Drive in the SM Mall of Asia complex in Pasay City. It was activated two weeks before the week-long Apec summit from Nov. 17 to Nov. 20.

Marquez and PNP’s Directorate for Operations head Chief Supt. Jonathan Miano personally showed the media around the MACC that will house all the communication devices to monitor and manage all the movements of the leaders and delegates from the Apec venues to their billeting hotels.

The MACC is technically equipped with a video wall system and radio communicators to provide timeliness and efficiency in responding to the security needs of the delegates.

A booth offering flu vaccinations for free to all security personnel was also set up.

Since Monday, Miano said the MACC has been briefing in batches all PNP personnel who will be deployed in the ceremonial routes, billeting areas, and the AELM venue.

Among the agencies that will be part of the MACC are the PNP and Bureau of Fire Protection, which are both under the Department of Interior and Local Government; Armed Forces of the Philippines, which is under the Department of National Defense; Departments of Foreign Affairs, Transportation and Communication, Tourism, Health, Science and Technology, and Social Welfare and Development; Presidential Security Group; Metropolitan Manila Development Authority; National Security Council; National Intelligence Coordinating Agency; Bureau of Immigration; National Disaster Risk Reduction and Management Council; Philippine Coast Guard; Civil Aviation Authority of the Philippines; and Office of Transport Security. JE