Does Nigeria have the world’s worst airport? 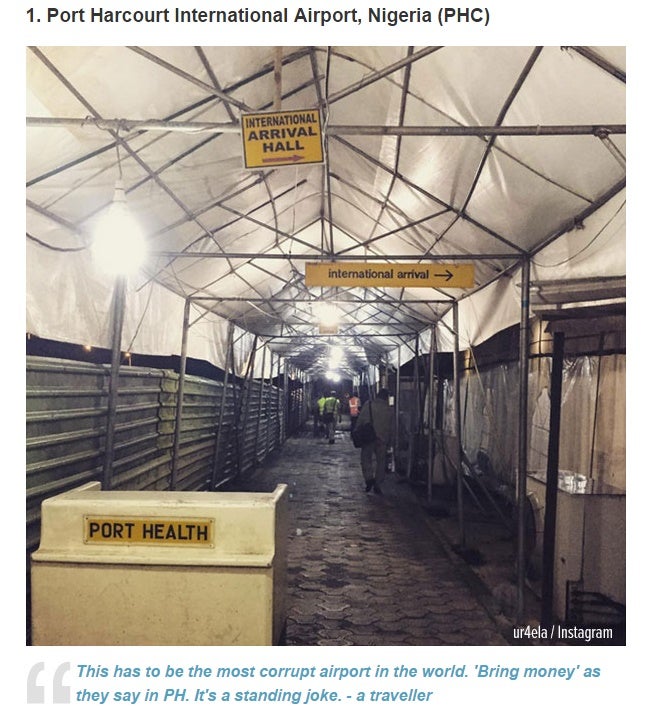 LAGOS, Nigeria–Unhelpful staff, demands for bribes, lack of seating, broken air-conditioning and a tent for an arrivals hall. Nigeria’s Port Harcourt International Airport was recently voted the worst in the world.

The damning verdict came from a travel website, sleepinginairports.net, based on feedback from thousands of travelers on criteria such as terminal services and facilities, cleanliness and comfort.

As well as the dubious global honor, Port Harcourt, Nigeria’s oil hub, was described as “the dirtiest and most corrupt airport in Africa”.

The capital, Abuja, and financial hub, Lagos, were judged seventh and 10th worst on the continent.

But the country’s aviation regulator, the Federal Airports Authority of Nigeria (FAAN), disputed the ranking.

FAAN spokesman Yakubu Dati called it “unfounded” as the domestic terminal at Port Harcourt was undergoing renovation and a new international terminal was being built.

“While we regret any inconvenience experienced at these airports, including Port Harcourt International Airport, due to ongoing construction projects, we promise all airport users that services at these airports will surely get better at the completion of these projects,” he told Agence France-Presse.

Nigeria’s aviation industry has evolved since the liquidation of the state-run Nigeria Airways in the early 2000s because of mismanagement and corruption.

With more than 20 functional planes in 1979, the national carrier was left with just two in 1999, prompting the government to throw open the skies to the private sector.

Carriers such as Arik Air, Dana Air, Aero Contractors, Med-View, Kabo and Overland Airways have since emerged as key players.

Arik, which has a partnership for maintenance with Lufthansa, is dominant with a strong presence on domestic and regional routes, as well as longer-haul flights to London, New York and Johannesburg.

Med-View recently got the nod to fly Lagos-London from November 20.

On domestic routes, fuel shortages regularly lead to flight cancellations while air crashes, such as a Dana Air flight that came down in Lagos in 2012, killing 147, have generated safety fears.

In airports themselves, decaying or non-existent facilities have failed to make good impressions.

In 2012, the government awarded contracts to remodel Nigeria’s 22 airports, including the construction of new terminals at four international airports, with the help of a $500 million loan from China’s Nexim Bank.

On completion, the projects are expected to help grow passenger traffic to 16 million passengers per year, from 14.1 million in 2012.

Aviation experts, however, say the extent of works do not correspond to the money spent.

“The remodeling of the airports has been on for four years, but regrettably, not much is on ground in terms of modern facilities,” said a former senior official of the Nigeria Airspace Management Agency on condition of anonymity.

The chairman of commercial carrier Arik, Joseph Arumemi-Ikhide, shared a similar view and called on the government to focus on infrastructure, from terminals to luggage conveyor belts.

“With this and good fuel supply the airlines can operate efficiently,” he said.

Niyi Akinnaso, a US-based university teacher and newspaper columnist, said familiar Nigerian problems of mismanagement and corruption were holding the sector back.

The $500 million Chinese loan would not have been necessary if there were proper accountability in revenue collection, he argued in a recent article in The Punch newspaper.

He said the Federal Airports Authority of Nigeria rakes in more than $2 billion a year from passenger surcharges and other fees, including a $60 surcharge from every international ticket.